As the blanks rack up at a phenomenal rate I maintain the desire to get out and do my best to put a big Barbel on the bank during what are currently poor conditions. Now I know Barbel will still feed in the cold and with the frosts already settling in opportunities are going to be even more reduced, on top of that the work always picks up closer to christmas before having my usual festive siesta.

During the christmas break I do hope we get some mild rain and bring up the temps 2-5c, when this does happen I'll get back out as much as possible, at the moment I am trying to nick the odd session here and there just hoping that I get lucky, how many times can I blank?

Its probably an answer I don't want to know as I suspect it is going to be a far greater number than I would have liked.

Not that this sort of fishing is easy of course and some of the rivers I am currently targeting are not known for big heads of Barbel, most sections are holding possibly the odd decent fish. My task is to find them and put them on the bank.

After a couple of weeks since hatching this most recent of plans with a friend of mine Mark a trip back to the Colne was pencilled in for Saturday. We arrived at 7am and began swim hopping with a big lump of meat, in such cold conditions it was possibly the best way to find a feeding fish, or at the very least tease something out of its lair. Fishy looking swim after fishy looking swim was worked well but nothing showed up across the expansive gravel runs that the Colne is famous for. Midday came and went in a flash without a touch.

We were both having a good catch up and its been a long time since I last had a decent chat with Mark apart from when we've crossed paths in London when we've been working (we work in different trades), so to get the chance to do some fishing was pukka. Clearly we knew it wasn't going to be easy, we both trotted, rolled and static fished and my only bite of the day came around 2pm when I was fishing tight to an overhanging bush where my rod steamed off, I struck nice and firmly only to hit thin air, it certainly wasn't the outcome I wanted given the lack of activity, but it spurred me on as I knew at least one fish was present!

And, before we knew it the rods were out for the last time as darkness consumed the horizon, waiting for a bite in the witching hour is always a time where the hair stand on end, just waiting in anticipation for the rod tip to tap or slam around with a big powerful winter fish in tow, sadly, for us it wasn't to be as it was time finally to call it a day, a shame really as I had hoped for at least something to show itself, given the cold conditions I have convinced myself that the fish were tucked up under foliage and the like, awaiting the next warm spell and the river temps to creep closer to 50f. 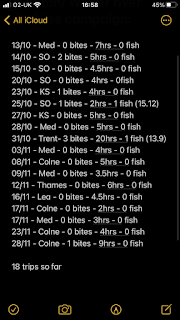