A Decent Morning on the Chub front.

With my Barbel quest taking centre stage for the last 6 weeks I have been feeling a tad stale with all the blanks I have been enduring, especially after I had caught a couple of super Barbel a few weeks back. So to break up the blanks I needed a pick-me-up, what better way than grabbing the trotting gear for some winter Chub fishing.

A hard frost has covered the vehicles on the drive for the last two mornings and knowing it wasn't going to be warm I knew Chub were the only species that would still provide me with a few bites. However things were not straightforward if they are ever are in angling. I arrived to find my target river gin clear, painfully low and upon hopping into the water I could feel the water temp was very low.

Armed with two bags of smashed up bread and a half loaf for the hook bait I hoped that running out of bait would have been my biggest worry, two hours in and it was apparent this wouldn't be a problem and that my issue would be getting a fish to the net. It's amazing the session you picture in your head when you're planning and the reality is so very different and maybe part of that is down to my optimistic approach to my fishing and that it isn't always going to go by the book.

By 11am I was scratching around and had managed 2 little chubblet and a solitary Roach to show for my efforts. I kept mobile and trying runs in between weed and deeper slacks off the lacklustre flow. As I got about half a mile up I was starting to think that those scratchings were going to be my lot until I found a nice eddy off the main flow and in the past I have managed a few fish from this particular stretch but its never proved to be easy pickings and typically it only throws up a couple of fish and then the area goes dead.

Twenty minutes later I was breathing a sigh of relief as my baiting of crumb had worked and slipped my net under a nice low 4lb Chub, from that point on I never looked back, it was all guns blazing! It was the sort of sport I was hoping for as my float was running down the back on an eddy I was fishing and burying itself at almost the same spot every time, Chub after Chub came in and the next was clearly waiting in line to snaffle my flake.

For the next two hours I continued to manage the run by feeding and resting after every fish and it was a plan that clearly paid dividends as the bites dried up once I had netted my sixteenth Chub, I spent ten minutes after landing my last Chub to try and get another bite but that was it. Six feet of water was clearly what the fish wanted over their heads and with it being very cold to the touch I guess the fish were just huddled up. 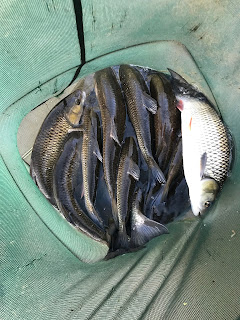 The final score was sixteen chub worth counting that went between 3lb 5oz and 5lb 2oz, it wasn't easy but once I had found them they were in fine feeding form and a resting tactic I think was the difference between maybe two or three Chub and what I finished up with.
- November 22, 2020