I have to admit, I have wanted to fish the R.Nene for many years but have never made the effort, this 40rivers challenge is going to be a great way of seeing and fishing these rivers that have appeared in certain aspects of my angling life, whether its reading about them, knowing people who fish them or simply passing them on my travels elsewhere.

Before I made it up to Peterborough I stopped off on the R.Lea to try and break my Barbel duck after four attempts between the middle Lea and Fishers Green, its not been easy for Barbel at all. I decided to try a different section and see how I would fare, the answer was pretty good, although it took me over an hour to get in position, no doubts at all that these fish have definitely not been targeted. After my monthly quota of jungle bashing was over the bites came roughly every forty minutes and I opened the account with a 5lb+ fish, fairly typical for the middle/upper reaches.

As the night wore on another three came to the net with best going 7lb 4oz, yes it wasn't a double but a start nonetheless and packed away before jumping on the A1M northwards. Another 70 miles beyond the Lea bought me to a beautiful stretch of river in the heart of the Leicestershire countryside and the sunrise wasn't bad either once I'd grabbed an hour kip at 5am. 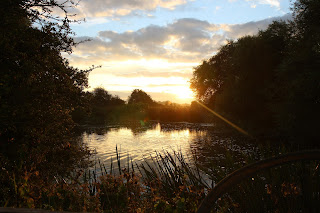 I began the day rolling meat from a weir at the end boundary and was immediately pestered by Chub, some of which were not bad and over the course of the day I managed four with the best weighed 4lb 15oz, my target of course was a Barbel over the 10lb mark but would welcome any sized Barbel and given the fact that probably 8 out of 10 Barbel caught where I fished were doubles my chances of complete success was good!

So when I did finally get a savage bite out of nowhere I quickly sprang into life but within seconds disaster struck as the run was so powerful it smashed me up, however this was no Barbel but a big Carp so the hammer blow of losing it was softened somewhat. Not that I dislike river Carp of course, I'm just not there for them this time around. Then everything seemed to go quiet so I spent more time rolling meat with very little more than the tentative plucks from tiny little mouths.

About 1530 I popped back to where I lost the Carp and setup in identical fashion and placed the bait in the pacy water and hoped another chance would come by.....thirty minutes later a couple of delicate taps registered on the rod tip which were swiftly followed by a savage slam towards the water, the next five minutes were played with a real I give you some and then I take it back, constant back and forth with the clutch was needed as this fish sought to make full use of the 9ft I had in front of me, my experience and suitable tackle got me over the line though and this beautiful 8lb 7oz R.Nene Barbel was in the bag!

Not that I knew it at the time but after releasing that Barbel it would be the last fish I'd see for the rest of the day, I honestly sat back into my swim thinking I had got them feeding, unfortunately for me it was wishful thinking, I did enjoy myself and on the way home I took a diversion to the R.Ivel to see if I could spot any big Chub or Barbel in the torchlight and potentially give them a go, but after 5 swims and 2hrs roughly I didn't muster a bite so I went home for some much needed sleep, one hour in forty two is tough going with over 350 miles of driving thrown in and don't worry, with a 3 year old and a 4 month old I'm used to sleep deprivation!!! This was just self-inflicted, to be fair though, so were the kids :)