Well, what can I say. As the title above clearly indicates, I have somehow managed to achieve a feat I honestly and truly thought would take me dozens of visits, on just my second outing on to the R.Ivel a double figure Barbel lay in my net. But, let's rewind a little to fill in those blanks.

On the 17th of Sept' I was on the Lea and Nene where I had caught on both rivers, on my way home I did take a detour to the Ivel to have a look around, lamping around with my bright torch I hoped to illuminate shapes on the bottom or amongst the weed, I spent roughly two hours doing this with no joy, having slept very very little I needed to play catch up.

Today's trip came as bit of a surprise as we were at Butlin's for the week for my daughters 3rd birthday treat...(where has the time gone) and got back Friday afternoon, Sat' night and Sun' day fishing time became available, so then came the dilemma of where to fish. Then I thought back to my wander along the Ivel and thought it would be worth a go again, this time armed with a bit more time and a rolling meat approach.

There are not many techniques better than rolling meat and from the off at 1am I was catching, but of course it was Chub, the first one weighed 5lb and then the following fish going between 3lb - 4lb with another around 5lb that I didn't weigh. Barbel on the other hand, that are my target are extremely thin on the ground and coupled with the fact I don't know much about the river the odds were really stacked against me. After years of systemic Otter predation the Ivel has seen a majority of the old guard eaten and plenty of the back up fish faced the same fate.

Thats what made this capture so much more impressive as I was expecting to be on this river a lot! So when I rolled a bait a couple times under large set of willows following half an hour of static fishing before hand in the peg and maybe a hundred plus rolls along a half mile section my finger was nearly sliced off and the rod nearly pulled from my hand! There could be no doubt in my mind it was a Barbel, the outcome could have been so very different too. When the fish decided to tear off downstream on its first run it went under the willow branches and roots where the fish then became locked up, the glasses came off as I couldn't see through them anymore and relied on some patience, allowing the micro-barb hook to stay in place whilst I removed the pressure. Thankfully for me it did the trick after two minutes or so of negotiating the Barbel, she came free and I eased her upstream to a clear area where my brand new net awaited.

A River Ivel double and also my 10th river chalked off, my pre-season target has now been achieved and what a fish she was too!!! 10lb 14ozs GET IN.....I was not expecting a result so soon if at all. 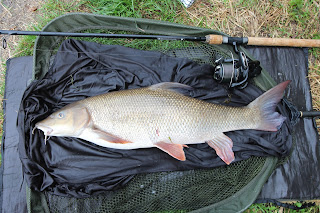 But the capture of that Otter dodger very nearly wasn't all, as I was making my way back to the car on the phone to a mate of mine I spotted two Barbel, both doubles, one clearly much bigger tucked away with four big Chub under a tree canopy, inaccessible but I could make the cast, these fish however clearly knew that they were being targeted and very quickly shut up shop and after twenty minutes of trying I admitted defeat, packed up and drove to the R.Lea where I hoped to continue this incredible run of form.
That run of form on the Lea doesn't seem to be replicated and I am struggling to get bites or find fish, I must keep moving until I do, but the river is to die for, everything you could want from a bit of river fishing, oh except some fish!!
This image is pretty cool though I think. 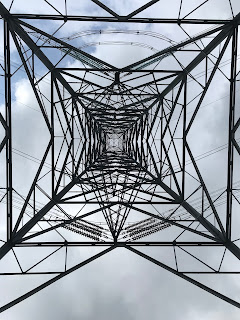