Another Season on the Bank.

Well what can I say about the 2021/22 season. It was bloody brilliant, lots of lows but amongst those lows I caught some big fish to really keep me focused and well and truly on track with my target for a double figure Barbel off of forty rivers across England, Wales and Scotland. So here is how it panned out!

I only fished once in April so there wasn't much to write about there and May wasn't too different, a single trip out in search of Golden Orfe and Tench resulted in a success on both fronts, a cold spring did make fishing difficult on the day but did finally come good.

June:
Again it was a very lean time for me fishing wise as the birth of my second child meant I was helping out at home and being Dad, I did manage two trips (1x Medway and 1x Mole) but these resulted in blanks.
2 trips / 2 blanks / 6hrs / 0 Barbel / 0 Doubles.
July:
I found time slightly easier come by on the bank as I was back to work, this gave me the opportunity to fish a bit on my way home and did start to have some successes, two of the six rivers I had fished in the month of July produced double figure fish for me in the shape of these below. Apart from that I had the odd Chub too and three smaller Barbel to 8.13.
11 trips / 7 blanks / 40hrs / 5 Barbel / 2 Doubles.
August:
Again, in August I found myself getting about quite a bit with most of my trips being conducted after work, but I did also manage a superb road trip up north where I struck gold on multiple fronts. Nothing could have prepared me for the achievement I was to receive. A tough start on the Mole did come good on the sixth time of asking with a stunning double figure Barbel slipping over the rim of the net, I also rocked up on the R.Derwent, having never been there before and had a red-letter-day to rival all!

Trips 12 / Blanks 8 / 51.5hrs / 4 Barbel / 2 Doubles.
September:
This was yet another lean month for me and considering its possibly the best month of the season to target Barbel I simply couldn't get away from work and family matters, which in the grand scheme of things is more important, said no angler, ever! When I did get out I had some successes on the river Lea and Nene, but most notably was my incredible capture of a R.Ivel Barbel and a double at that. A river touted by many as a river in serious decline over the last decade through varying factors, it only took me 11 hours in total to manage the feat...child's play this Barbel lark :). Plus I also managed a big Kentish Stour Chub of 6.01 whilst rolling meat for Barbel, quite a turn up as that's a huge fish for the river.
6 Trips / 3 Blanks / 35.5hrs / 6 Barbel / 1 Double.
October:
A few trips were made through October and I had high hopes for a couple of the trips, however things were starting to go against me as I found conditions weren't in my favour and was missing the good conditions to be on the bank, I was quickly finding out that learning new rivers in the cooler months was hard going as I found it difficult to locate and stalk fish/potential areas. This will be a recurring theme I'm sure and ended the month Barbel-less, in fact the only fish I did catch were off of a R.Test tributary in the shape of some beautiful Grayling to just over 2lbs.
6 Trips / 6 Blanks / 37.5hrs / 0 Barbel / 0 Doubles.

November:
My Barbel fishing by this point had taken bit of a nosedive and given the cold crisp conditions I sought out other species to target and although I did try on the odd occasions for Barbel it was the Grayling fishing that proved most fruitful. Two trips to the splendid R.Wylye in Wiltshire provided some of, if not the best Grayling fishing I've had the pleasure of experiencing. Numerous two-pound plus specimens were caught whilst trotting with the best in November weighing 2lb 7oz. I did also manage a stonker of a R.Colnbrook Chub too weighing a massive 6lb 6oz which was taken whilst in search of the elusive Barbel that do call this river home, not that I can catch them!
4 Trips / 4 Blanks / 29hrs / 0 Barbel / 0 Doubles.

December:
Just two Barbel trips were embarked upon in the last month of the year and given how poor my previous couple of months were for the species I didn't hold out much hope, but what do you know! A mild spell just before new year produced a super looking R.Lea powerhouse which bought an end to my mini drought, but also my time on the river which to be fair had been tough, well earned and one of the hard ones taken care of. Also as the weather got colder I fancied a go for some river pike and was rewarded with a superb mornings sport, two Pike were landed but both well worth catching with the best just missing out on twenty pounds.
2 Trips / 1 Blank / 17hrs / 1 Barbel / 1 double.
January:
A month of almost seemingly endless frosty mornings, could only mean one thing, Grayling! A return to the R.Wylye produced my best ever days sport for the species and taking no less than 7x 2lb+ fish to 2lb 9oz, quite a day it was. The Itchen was also on my radar and although the Grayling didn't show for me in numbers the Roach put in a surprise appearance and managed a few to just under 2lbs.
0 Trips / 0 hrs / 0 Barbel / 0 Doubles.
February:
A couple of trips out for Barbel were had, one on the R.Severn and one on the Colnbrook as I hoped with the slight increase in river temps would begin to stir the Barbel into feeding. That didn't happen. All I can remember was an expensive night trying to get out of a field.... 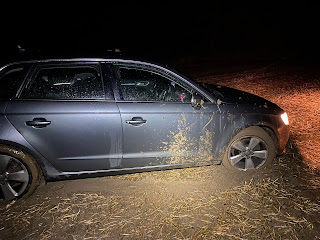 2 Trips / 11.5 hrs / 0 Barbel / 0 Doubles.
March:
At the turn of the year I had my sights firmly set on having a 7-10 day assault on the rivers towards the back end of the season to try and find myself another river double to boost my tally even further, and it could not have started any better as I joined friend and fellow blogger George for a morning (wasn't planned this way) on the Warks Avon to target a Barbel, I left the river at 1pm having not only bagged a monster Chub for the river, but also a big Barbel too. The blanks that had mounted up were all but forgotten, it was a brilliant mornings fishing and to share it with George was wonderful!
I then went on to fish the R.Severn, R.Bourne, R.Dorset Stour, R.Itchen all with the view to maybe adding one last fish to that now very impressive list, much to my dismay however I drew almost a complete blank on all of those barring a few modest Chub. It wasn't until the penultimate evening on the R.Wey that I got a chance to wrap up the season with a bang, that said the Barbel I hooked had no inclination to stick around and after a brief battle a large unseen fish smashed me up in a nearside tree, thankfully for me whilst still cursing my rotten luck and thinking of drowning my sorrows did my rod hoop over again to produce another double figure Barbel, I got that grandstand finish I had dreamt of. It was not the way I planned it, but when does it ever go to plan aye? What an end! Eight different rivers chalked off my list in just this season alone, which now brings me up to 13 rivers out of my overall target of 40. Can I reach 20 and the half way point by the end of next season? That will be my target.
9 Trips / 75.5hrs / 2 Barbel / 2 Doubles.
- March 20, 2022