New Gear and Preparing For My Wye/Severn Trip.

Its all starting to get a little bit exciting now as Friday is getting just that little bit closer!, a trip over to the River Wye to begin with, then hopefully moving on to the Severn to bag a few fish with a double figure Barbel of course being the main target.

I head to the rivers aiming to get river number 15 signed off on my challenge and maybe even more than that if I get very fortunate, I have also had Barbel off of 21 different rivers and the Wye isn't one of them having never tried my hand on the Barbel mecca.

Preparations have already begun and around 20 rigs have been tied, some 10-12 inch, some 18-24 inch to hopefully cater for the different scenarios I may find myself in and with the rivers being snaggy, more notably the Wye with the rocks/boulders I needed a fair few as back up. 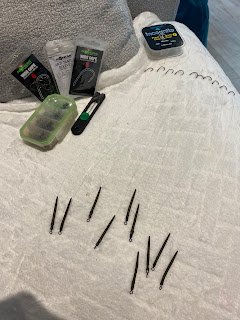 For the terminal tackle I've gone with 15lb Flourocarbon (Kryston - Incognito) as river conditions continue to be low and clear, so giving myself that edge of near invisibility may be the difference between confident feeding and fish approaching very cautiously, I want as many fish as possible as the numbers game on these rivers needs to be played unless I get really lucky, which is not beyond the realms of possibility.

The remainder of the gear is my usual go to's, strong pattern of hook in size 8 and 6, with size 8 swivels and fishing predominately on the hair but will also roll meat where the conditions allow.

For a number of years I have wanted to get myself one of these centrepins and finally decided to treat myself, the Purist II by J W Young & Sons Ltd is up there with the very best and have bit the bullet and bought one, its first outing will most likely be the Wye/Severn trip, but can I christen it with a beast? Only time will tell. 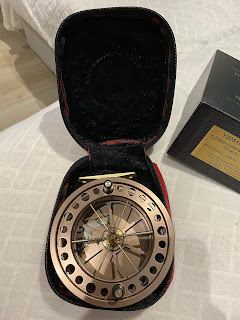