From the R.Dearne I travelled a bit deeper into Yorkshire and set about tackling the R.Don, now unalike the R.Dearne I have never seen it before, also I've done very little research on it but know a chance of a double is possible. Like most rivers across the country they have been out of sorts and rewards have been few and far between. Tried and tested is always the way to go on any new water so I treated the Don no differently.

So I followed some sound advice from my mate Ash who suggested giving this section on the DDAA book, I bought a two rod day ticket and plonked myself in a swim that looked good and planned to fish an hour or so into darkness to try and illicit a bite at arguably the best time of the day. Once settled I grabbed my camera out of the bag and marvelled at my Dearne double.

I purchased my tickets around 6pm with the view of fishing a couple of hours and yes, I know it's not long but for a tenner I can't really complain and once I got building the swim with small pellet I cast out with a lump of meat on one rod and a boilie on the other, the area I fished to was around 5-7ft deep.

I had no expectation.

I sat patiently waiting for an enquiry and to my surprise I got a decent pull on the tip that I struck, the resistance wasn't much so I suspected a Chub, but this little beauty popped up! A mini R.Don Barbel, what a pukka little scamp. 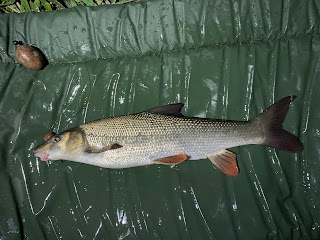 One day that'll be big, maybe as big as the fish I hooked next! A short while later my inside rod on the meat went and this was a much bigger fish, it hung deep in the flow and made numerous powerful runs up and downstream before it gradually tired. In the torchlight she looked a decent size and felt this fish could be a double figure fish, could it be? 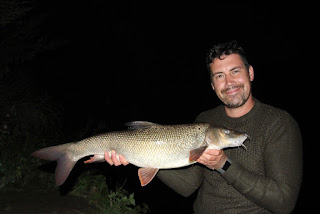 On the Rueben Heaton' she registered a very very very pleasing 10lb 5ozs, in the space of 5hrs I had landed a double off of the Dearne, driven to the Don and now I had slipped the net under a R.Don double, how bloody good is that!!! I was firmly perched on Cloud Nine, how on earth could I top that?
I didn't think it was possible, but with a trip to the R.Wharfe planned for the Saturday up in Wetherby I knew I had a decent drive ahead of me to North Yorkshire. However, I had only been fishing an hour and a bit so I decided to stay for a while longer to see what may transpire before calling it an evening.
- September 28, 2022