Last week was a week of indecision, Brian and I were planning to head up to the Wye and Severn for a few days with the view of both targeting a double figure Barbel off of both rivers. Unfortunately for Brian his health isn't quite there to the level required to embark on a 4 day marathon of two demanding rivers, so given this development we decided to postpone it and then the cogs went into meltdown, over the 48hrs or so leading up to the planned departure I had all sorts going through my mind, finally a few hours before I set off the beginnings of a plan were finally in place, I was Yorkshire bound!

I was loaded and ready to go at 3am, with a 211 mile journey ahead of me I chewed into the miles with the visions of big things, my last trip out was a total success as I managed to target a R.Mersey double successfully "My Mersey Double" and made good inroads on the R.Tame whilst also blanking on the R.Dearne. This was a case of picking up where I left off. 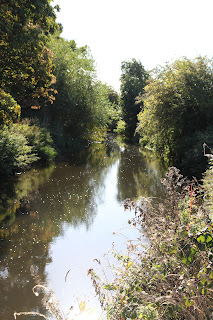 Arriving around 0630 to a brisk but sunny morning I felt rolling meat would be the best approach, this would as usual enable me to cover miles of water and also initiating a response from a Barbel that could either be well hidden and drawn out of position or in plain view and the process of plopping a lead in would alert the fish thus potentially ruining the opportunity. My first few rolls across five pegs were ignored and I didn't see a single fish ( also just to put into context, the Dearne is not prolific at all, in fact it is a tough river with not a lot of Barbel present ). 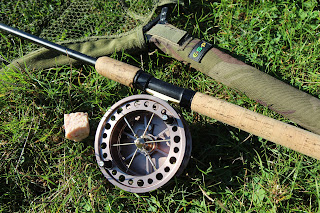 One peg I really did fancy the look of was a narrow run treelined on the far side with a canopy jutting out that looked like a good place for a fish to be held up, so I set about working the run and on my first roll the bait moved freely then through the back of the canopy without incident, that was until out the corner of my eye something moved in the murk but couldn't tell what, within seconds my bait disappeared and the flash of a substantial Barbel turned on the bottom and powered off downstream but more alarmingly to the next large willow canopy.

I had a good view of the fish and immediately knew it was a double, my heart rate shot up and I began to shake, just an hour in to the session and I'd found and hooked my target fish! My job now was to negotiate the myriad of trees and snags which looked at best perilous. In the tight peg I was shoving the rod tip under the water when she ploughed over the far bank treeline, then I got her out into open water I had to put side strain on it, then she shot under the trees again, the rod was sharply shoved under the surface again, this battle of wills continued for 3 or 4 minutes before I felt confident I would get her out, I leaned behind to grab the net that was made up and started to ship it out, but that last lunge for freedom is always one to look out for and regardless of how experienced you are they can catch you out with that raw power. She bolted across the river straight for a set of tree roots I had managed to avoid through the whole fight, this time I wasn't so lucky. She got under them so quickly I didn't have time to put the breaks on her and she went through the roots and came out the other side. Now I knew I couldn't put much pressure on her so I opted to let her drop down on her own volition, problem for me was I could feel the line grating through the fight and wondered how bad the line was (12lb), to my utter dismay and absolute disappointment she kicked hard and pushed on upstream further and this was the kiss of death as my line parted, the tension was lost and she continued on up river without me...I was distraught, I can't stress how tough that was to take knowing that may be my only opportunity of the trip to get one, but as you know from the title this wasn't true - at the time however I wasn't to know this so I worked tirelessly to make amends in the heat and near impenetrable banks, just trying to sniff out another opportunity.

I lost that Barbel around 0700 and spent the next 4-5hrs covering 3.8 miles of river, most of which was beautiful, unfortunately in my case baron of Barbel, this really was a game of perseverance! But I consider myself a dab hand at finding fish even in tough conditions and I did just that. I found three Barbel in with around half a dozen Chub, and two of the Barbel were doubles! question I wanted to answer could I hook one of the Barbel and land it. You bet I could and what a fight it was too in the fairly clear water, and she looked like the biggest of the three Barbel too, a super fight ensued and made short work of it with very little to worry about in terms of snags, once clear of where I hooked it I enjoyed the rest of the experience.

On the Ruben Heatons she registered 10lb 9ozs and she was my 15th different river Double, the Dearne has been completed and what a beauty too! like a new penny.
About twenty minutes after I released her my mate Ash popped along to say hello and bought along a celebratory ice cold beer! Much needed and even managed to get Ash using the centrepin and try to catch one of the other Barbel that were still present but unfortunately didn't commit to making his day too!
I was extremely happy with that, what a contrast in emotions, total deflation to elation, angling really does have it all and who says angling is a lazy mans game?