As expected when fishing down on the lower stock southern rivers I am suffering from a dose of the blanks, left the banks of the R.Taff with a double under my belt and full of confidence, to only blank on the Itchen for 48hrs! then blanked on the Loddon a week or so back too.

Sunday evening I had planned to head back to the Loddon to try and get myself river number 18 chalked off. I know the Loddon is a tough nut to crack and seem to have a few of these "tough ones" on retainer, what with the Itchen, Sussex Rother, Kentish Stour, ColnBrook and Loddon all taking up a decent amount of time with very very little to show for it. 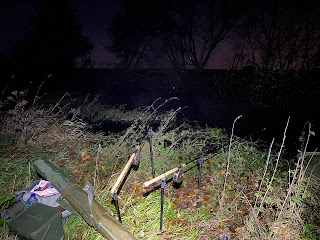 When I arrived at the top of the river it became very clear very quickly that it was high, the fields were reminiscent of an inland sea! Somehow I picked my way to the river on the tufts of grass that were slightly elevated than the rest, the question was, was it a good idea? I couldn't tell if it was rising still, however the conditions were far too good to pass up on and carried on with my plan, just needed to make sure I could still get back to car which was a good ¾ of a mile, my boots were really getting put to the test. As a side note I could still exit the field at the bottom of the section (another ¼ further down so a mile back to the car! so I wasn't any danger, just wet and cold feet!

When I arrived I took the water temp which registered at 14c which I was amazed at. With the added flow it did limit where the Barbel may be, you'd have thought the conditions were perfect, I fished one rod upstream on meat and the downstream rod with boilee wrapped in paste, the plan was to wait it out in each swim, typically about two hours to allow fish in the general area to locate the smell/scent and get acquainted with me. The first 6hrs! yes six hours passed by without incident and was just about to move for the third time (I spent longer in both swims just in case) when a huge Otter passed me going upstream when a huge bow wave came from under my bank, which I can only assume was a Pike ( which was big ) bolted from under my feet going downstream as the Otter continued on, the fish that spooked was very big and made almighty noise and disturbance, oddly old Tarka just going, hopefully loaded up on crayfish!

For me the next two moves yielded nothing either and of course, by the end of the trip (around 7am) I had blanked. I can't say I'm surprised and since then I paid another 10hr visit to the river on Friday (11th Nov) overnight where river levels had come down around 4ft but still good colour with a temp of 13.1c so it had dropped around a degree in a week. Thats my fourth trip this season to Loddon now and I haven't had a bite, even a small Chub wouldn't go amiss now and again!