Over the years I've had a few of these, whether it be Roach, Chub or Barbel they are usually a moment in time of immense enjoyment. Yesterday I joined Mike once again on the picturesque R.Wylye for a days Grayling fishing.

Last winter provided some superb sport where I banked numerous "2lb specimens", with the outside chance of a 3lb specimen to add to my growing portfolio of "big fish". Don't get me wrong, my PB of 2lb 11oz is very special to me and deemed to be a very large fish for the species, but would like to go one better!

We both arrived around 9am and had a leisurely wander up to the top boundary where we garnered the attentions of the resident cows and one very very big BULL! no signs on the field entrance seems a little bit crazy given the size of it and the propensity for them to charge or be a right pain in the bum! To begin with myself and Mike worked a large inside crease where the water drops off to around 8ft. Previously we had done well in this peg and with the cows in attendance we waited for them to get bored of us.

That gave us plenty of time to catch some fish and my first Grayling of the season was a belter! A sharp pull on the 11BB drake quill float was quickly followed by a strong fight in the flow which was a little stronger than usual as it was carrying a little more water and plenty of colour which initially did have me a little worried as historically I have not faired well in murky water when targeting Grayling.

Nevertheless it did not take me long to register my first fish of the winter which weighed a very pleasing 2lb 5oz, glistening in the low winter sun what more could you ask for!! 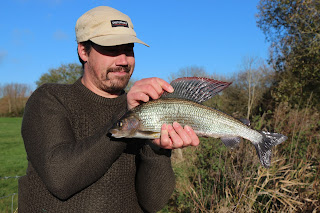 That was the start I would have hoped for whilst making the 109 mile journey!
Once she was released I set about running the float through the same runs and shortly after Mike picked up a lovely 2lb+ specimen before losing a big one to a hook pull which seemed to be a theme and most of the fish caught across the day were actually hooked by flaps of skin or just set in the smallest part of boney/fleshy mouth, I suspect that was solely down to the fish feeding quite tentatively and maybe the coloured water had played its part.
Once the cows moved to the other side of the field we made our break for freedom and got beyond the stile, from then on we split up after having a chat to try and find some more Grayling, to begin with it was actually quite difficult to find fish and even the areas I classed as banker swims last season provided nothing but the odd small Trout. There was a distinct lull in sport before I found another grayling, albeit small it meant there was fish around, next up was a fish around 1.04 and then I had a brilliant half an hour which spun the session on its head.
My float sailed down on the crease which I struck and immediately I knew it was a big fish so I allowed it plenty of room to fight and didn't rush it, problem was the sun was right in my face and even with the polaroids I could not see the fish or where the fish was in relation to the net, so when the splashes of the corkscrewing fish looked like it was over the net I lifted it and thankfully a Grayling was nestled in safely, and it was a bigger one!
A big broad bodied specimen that missed out on my personal best by 1oz! when I saw her on the mat I thought it would be very close to a new PB and wasn't wrong when the scales settled on 2lb 10ozs, super chuffed with that fish, but it got even better twenty minutes later when I had a carbon copy bite and a similar battle with a heavy fish holding deep in the flow with the rod bent double and the centrepin paying line as another big fish ploughed around the swift run with the wind whistling through the line.
A cloud came overhead as I reached for the net so I could see what I was doing and it was another big Grayling! it looked bigger than the first, the burning question I asked myself was could it be a new personal best?, bigger still could it be a 3lb+ fish?
I did my best to jiggle the scales but it settled on 2.11 which I could not be disappointed with, what a brace of Ladies! By this point I had had 6 fish and 3 were over two pounds!
I fished that peg for half an hour longer with a couple more smaller fish coming to the net before we broke for lunch. After the pitstop I headed downstream to a few 'banker' swims but they were nothing like the pegs I fished last winter, now they are weeded up, branches in the slacks, topography all changed it really does put into perspective how changeable the rivers are.
For about an hour I didn't have a Grayling but did have a few nice Trout, one of which was just approaching the net when a decent Pike charged at it and piled off downstream, broadsiding the Trout which nearly flat rodded me as the pin sang! After a minute it let go and the Trout came in none the wiser with a couple of war wounds to show for it encounter.
Given the time of year the days are short and sunset was fast approaching, thankfully I found another shoal of feeding fish and managed a few fish with another two "2lb specimens", weighing 2lb 3oz and 2lb 2oz. 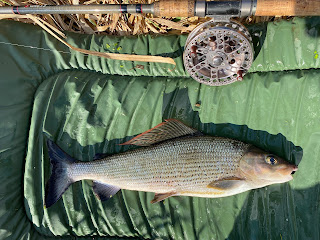 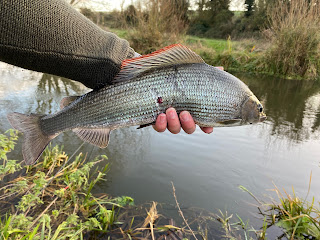 That took my tally to 18 Grayling with 5 over two pounds. What a day! 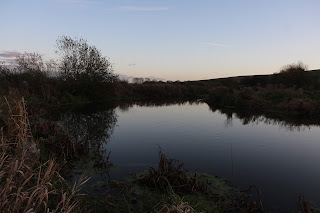 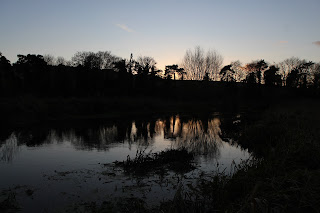 Email ThisBlogThis!Share to TwitterShare to FacebookShare to Pinterest
Labels: angling for grayling, grayling