Having arrived back into England at 6am this morning I did'nt feel there was much point going to sleep so I grabbed my trotting rod and a tube of avon wire-stem floats armed with a warm tiger loaf and do some trotting in the murky water in the hunt for anything that fancied a lovely bit of breakfast.

Today was pretty difficult due to the extra water and the fact that I always locate and stalk my fish as I feel it adds to the fun of fishing, but the conditions did'nt allow for that tactic so it was a case of simply trotting through the swims that I know fish frequent and within 20 minutes of roving my float slid under but in the murky water it was impossible to know what it was and after about 10 seconds it woke up and a Barbel for sure was tugging on the other end it obviously did'nt know it was hooked but when it did it made a dive straight for the bottom and held down hard in the current for what seemed an eternity to my arm, with a little bit of bullying the Barbel came up off the bottom and rolled on the surface and spat my hook, fortunately it was'nt a large Barbel at around 5lb but I don't like losing fish full stop but that's fishing.

During the session the river got darker and higher, the chances of catching fish was getting harder but I did manage to get a break when I looked in a swim further upsteam when something floated downstream and a Barbel about 9lb came up to the surface and sucked in whatever came down, I baited the hook and cast downstream and my float sailed away on the drop, the bait must not of even touched the bottom when my rod slammed around, another Barbel on and this one did grace my net after a cracking scrap. 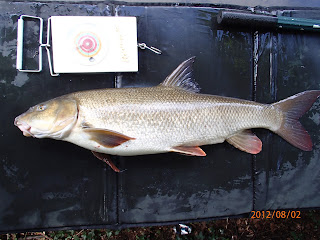 I would'nt mind catching that fish in 10-15 years time for it will certainly be a good double and from there on I only managed a Chub about 3lb with a fresh cormorant gash on its side that was still bleeding, but it looked in good health apart from that. Good to be back on the bank catching.﻿
- August 02, 2012