After my enjoyable day of Roach fishing last Saturday I couldn't resist in going back, so with a day off of work and having been selected for a match on saturday, today was my only chance to do some fishing.

With that in mind last night I packed everything and headed out this morning hoping for just a glimmer of what I experienced 5 days ago, when I got to the river I took my time in setting up and also getting some groundbait out to get the fish feeding and build up their confidence.

The session looked to have got off to a good start when after just 5 minutes I had already had a Roach bite and latched into, very quickly it was in my net but not a monster at 13oz, but after that fish the day took a nosedive in action and I tryed everything in my tackle bag to get the fish feeding again but it wasn't to be, I was thinking that I must have just turned when they finished breakfast, so I stuck around for about 2 hours when I got another take which again I connected to and it was a better Roach which weighed 1.10 (one of the bigger Roach).

4 hours of fishing had passed with 2 Roach in the keepnet, not the session that imagined but I guess I just expected more, but looking on the face of things the 3 trips before that one on saturday over a year period I only caught 1 Roach about a pound, so I was already doing better than those previous outings. But up came the Roach dinner party that I did hang around for and glad I did as the action really started to pick up with takes coming thick and fast, the sort of action I was hoping for.

The first Roach that came in was a 1.7 quickly followed by a 1.9 and a 3.1 Chub within 3 casts, 10 minutes later I had another Roach on which put a real good fight up and ducking and weaving in the weed so I knew it was a good fish and when it came over the lip of the net it was a definite 2lb + Roach with the scales confirming at 2.2, target aquired and enjoy the fishing as the more evening drew in the more feeding that was happening, that 2.2 was swiftly followed by Roach weighing at 1.13, 1.9 and just to put a gloss on it I caught another Roach at 2lb on the button, there was a slightly annoying situation that arose at the end when I hooked a lovely Rudd between 1.4 and 1.8, I did the hard work in navigating the weed and then lost it about 2 foot from the net! 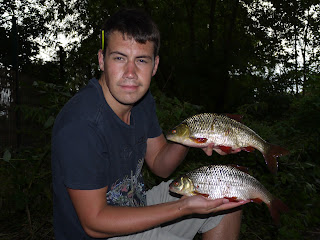 My brace of 2lb Roach. 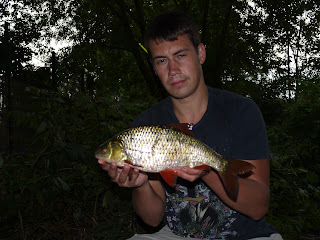 The biggest of the day at 2lb 2oz.