The other day my youngest brother Chris and I headed out to find some winter Chub and the session threw up more than just Chub as the post title suggests, it turned out to be far more than just the pursuit of the skelly's.

Early morning start for us both was in order to get down to one our local rivers before sunrise to meet with a friend of ours, Jeff Jr, who set out to locate the Barbel in the lower reaches of the river whose approach was a lot different from ours, the tactic we employed was a simple roving approach, travel as light as possible, so we left Jeff to his own devices and we set off on our way.

The session started off as planned with a capture of a 3.15 Chub on rolling meat, with my target of 5lb + this fish was the sort of stamp that are average if not just a little above but the larger fish are knocking around but in very small numbers so the target set was a difficult one but I enjoy the challenges that fishing can provide, just a short time after and a fair walk up river I latched into another good sized fish which was noticeably larger with the scales confirming 4.14 much closer to my target and a fantastic sized Chub. 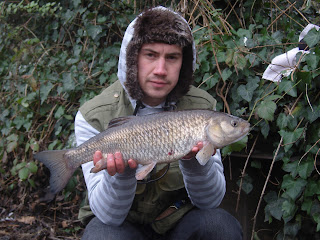 The larger of the 2 Chub.

Chris unfortunately hadn't had a bite all morning and he was finding it quite difficult to muster attention from his quarry, but that's fishing and he still is learning the ropes in river fishing. With no further fish after about 2 hours we carried on upwards by which time Stu popped over on the bike to stop and have a chat, but it wasn't long before I employed him for net duties when my rod slammed around nearly giving me a heart attack it was so fierce, it could only be a Barbel and the fight was very powerful and I struggled to land the fish on such light tackle, which consisted of that silly 10ft match rod again and 5lb line with a size 8 Barbless hook, but after a good 6 or 7 minute battle and a number of very strong runs a large Barbel slid into the net with an elated Stu calling it a double or his name isn't Stuart, but it registered 9.13 on the Avon's, just missed out on that magical figure but a lovely bonus for what was supposed to be a Chub outing. Sorry mate what shall I call you from now on??. 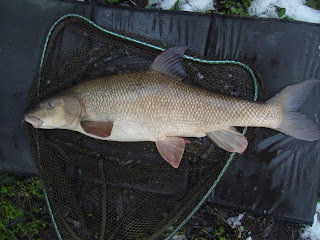 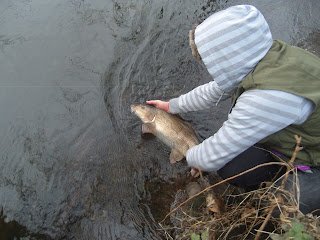 A lovely specimen and revived to fight another day.

Well that certainly was not expected and my rod just keeps impressing me, Chris was becoming more irritated at the sight of another fish on the bank that he hadn't had but it's part of the training, thing's like this take time to learn and perseverance is key!, not to kill off the swim I moved straight away and hopefully put Chris on a fish, within 30 minutes he had his chance twice but missed a good solid take both times which could have only been a Barbel but a change of approach was to prove absolutely pivotal as I advised him to go onto the float, first cast the float buried itself and he was struck firmly and a lump of a Barbel was snared but it took a good 5 minutes to overcome it and it was my turn to take over netting duties, whilst Chris was playing it the nerves started to have an effect on the playing and he tried to rush the fish and put pressure on it but I advised him to take it easy as doing that risked losing the fish and all would be in vein but he took heed and played it cautiously and guiding it into the awaiting net, Chris was understandably over the moon as I knew this fish was going to smash his old PB of 7.15. 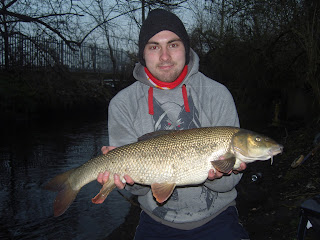 He was still shaking with the adrenalin and still reviving his fish when I had a trot through and my rod slammed around, he looked at me in amazement I just laughed whilst doing battle with a good size Barbel, which held firm and low for the entire of the fight until I got it up to the net, so we released Chris's Barbel into the margins then slipped mine in, 7lbs 4ozs it weighed but the colour it had was so good, this season these Barbel have taken on a lovely golden brown tone and us anglers that fish here have all noticed it, what has done it I don't know, my only guess is the diet or the amount of rain we have had has put a ting of colour into it which may have altered the amount of light penetrating the water column thus the Barbel being bottom dwellers their flanks have seen less light so the light hasn't bleached there colour out, just a theory of course. 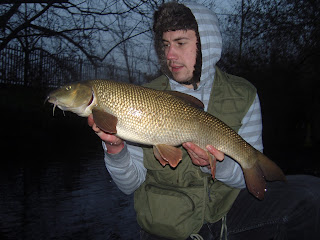 A perfect example of the condition that our Barbel are in.

With light fading now we just decided to head back down river towards the station to get home but that walk was is a good 2 mile walk so we just both took a slow walk and talked most of the way back, but walking past a swim that I've always liked I decided to have just a roll or two and on my first cast I felt a pluck on my finger tip and I struck and was met by a fairly strong fight for about four minutes, another Barbel slowly came to the net and that was number three of the day which went 5lbs 0ozs, another future Beast, one cast one fish and move, that sort of fishing is absolutely brilliant and you have to make the most of it as it is a rare occurrence especially in the winter. 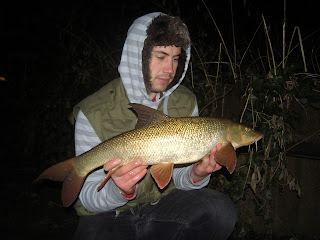 Later on we met up with the man with no name who decided to brave the freezing temperatures as well, he was had a couple of wraps but nothing doing so he decided to head down further so headed down with him and I popped into another swim to have a roll around and after four or five rolls my I struck into a slight bite I felt on my finger which turned out 3 minutes later to be another Barbel. 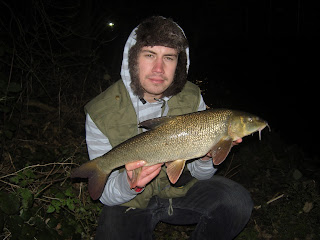 With that fish revived and released, Chris decided he was to have a go instead of being a spectator since his record breaking Barbel but couldn't manage another bite, so we moved and headed to our last port of call before we packed up and headed home, fifteen or so minutes passed when I had a rasping take rolling and immediately knew I was into a big fish, bearing in mind it was pitch black and the swim I was fishing is about 7 foot deep I couldn't see a thing, with the fish charging up river I had to follow it up about 20 yrds as I was totally powerless to turn it as it would have snapped me up on such light gear, staying low and fighting extremely hard I was thinking that it must be a really big fish because it was fast becoming the hardest battle I have ever experienced with a Barbel, the relentless runs kept going and going, nearly ten minutes had passed before I even got it up towards the surface to net, when it then took another powerful surge down river thus having to follow it back down the 20 yrds back into the swim I hooked it in, it really had other idea's in regards to being seen, the longer the fight went on the more my mind was imagining just what I was battling was it a Barbel or was it a Carp as I know they do occasionally get caught here or even a rogue Pike had taken a liking to a piece of meat which isn't unheard of, could it be a huge double or a fish just punching way above it weight, but I finally did manage to tire out the fish and when it surfaced a Barbel appeared my brother reaching for the net and scooping it in first time, I have never been so relieved to land a fish, but it was nowhere near as big as the fight suggested but a very nice fish all the same. excluding the 14.6 monster off of the Hampshire Avon Royalty fishery, this Barbel has to be the most powerful I've ever done battle with, truly amazing and one I will not forget in a hurry for sure. A lovely 8lb 1oz beard, not to mention the best Barbel haul I have ever had, not bad for a Chub session! 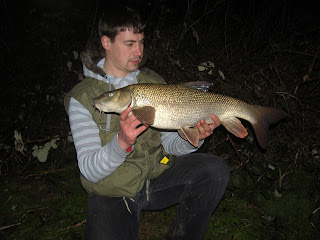 My arms were still aching after releasing that fish, "my god", is the only thing I could think of.

It understandably took a good five or six minutes to restore that Barbel back to health but she swam off very strong and ready to give someone else the potential fight of their life!