New Addition to the growing collection.


In my last post when I headed out in search of Roach and Dace, but only managing 2 good Barbel, I briefly mentioned a new piece of kit that I took out with me, the 10 ft Shakespeare match rod that for £20 seems like all thrills rather than no thrills considering the price but it certainly got put through it's paces and did surprisingly well. Plus I am also looking at buying a piece of history in the shape of a Alcock's "match aerial" centre-pin or a Fred Crouch "true pin" centrepin reel but at £170 it's not cheap. 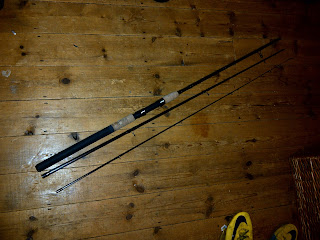 Also recently I have changed my line to Rovex mono-filament line because of issues with the last brand of line that I had was breaking too easily under slight pressure but no where near enough that would warrant a breakage, to say the least even though it's early doors I've had no problem yet and also a quality that my previous line didn't have was the fact it doesn't mark easily when pinching shot on especially when rolling meat plus the diameter of the line is amazing with the 9.7lb breaking strain spool is 0.23mm. The breaking strains I use is: 4.8lb, 7.3lb and 9.7lb, using various breaking strains for different target species and also based on how snaggy the swims are. A typical spool below for my silver fish trotting. 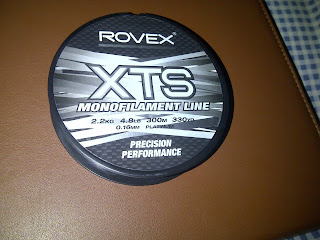 Brief catch up from last week as well, my brother Chris and I did pop out for a very short session but unfortunately didn't manage to land any Pike which was our intended target but Christopher did lose a small jack that spat his Sprat just before I was going to net it, but that's fishing and we did fish some really Pikey looking swims whilst on the River Mole but it just didn't pan out as planned but another trip is in order soon hopefully this really cold snap will get the bait fish shoaled up where the Pike will surely start to feed a lot better than have so far this winter. 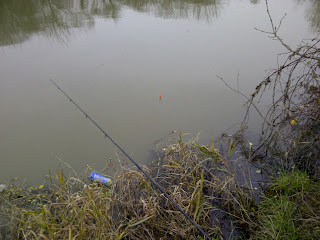