Crucian's were on today's agenda and within close proximity to London there is no better place to fish than Marsh Farm for it's famous Cru's, the last time I came down I did a heads or tails whether to fish Richardson or Harris lake, Richardson won last time, so I headed off to Harris lake with my brother Chris who also joined me. 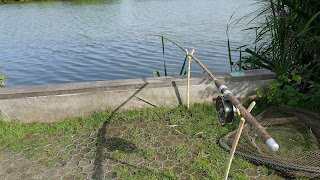 The day started off with a couple of Tench but only small ones to around 2lbs, the day was very slow going and bites came very few and far between, plus there was quite a breeze on the surface making the usually delicate bites nearly impossible to spot, for about 4 hours we both scratched around for hardly anything, Chris was picking up Perch but nothing substantial, so we decided to get some drinks and as we did we passed two match anglers who were tearing the absolute arse out of the place, they had been there 2hours and had more than twenty Crucians's, the largest going 3.6 and we see them bank a 2.14 as we stood watching them in awe, the tackle used was scaled down to a ridiculous level.

No wonder why we couldn't catch any, we just didn't realise how delicate people were fishing just to connect to them, extremely impressive watching them, normally I do alright on any fishery I go to but I wasn't prepared for it, but after being inspired for a while we both decided to carry on what we were doing and just stick to it and hope that a Crucian would slip up, but as the evening approached and the sun finally started to lose it's heat the fish started to move and a range of different species came to net between us, Rudd, Roach, Tench, Perch but the Crucian's still avoided us like the plague and as 7 o'clock came we had to pack up and head back to London. Greeted with 3 goals from Arsenal as we beat Fenerbache in Turkey, job done boys. 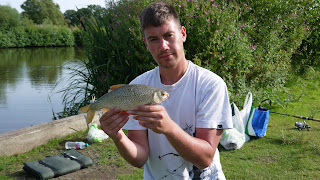 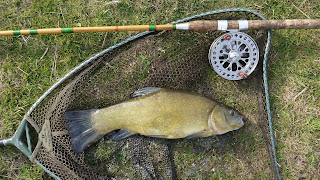 Typical Tench of around 3lb. 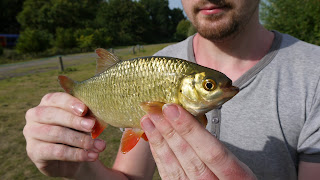