Grayling have long since been one of my favorite species but excluding my trip to Britford back in the Autumn I have never caught one, over Christmas I kept a watchful eye on the weather right up until Friday night, a quick call to the river keeper confirmed that it was fishing very well was good enough for me even if the wind forecast was to be reaching speeds of 25mph, when trotting the wind you can certainly do without but I thought I may not get another opportunity so I booked my tickets and at 5am I was ambling around my house getting the gear together. 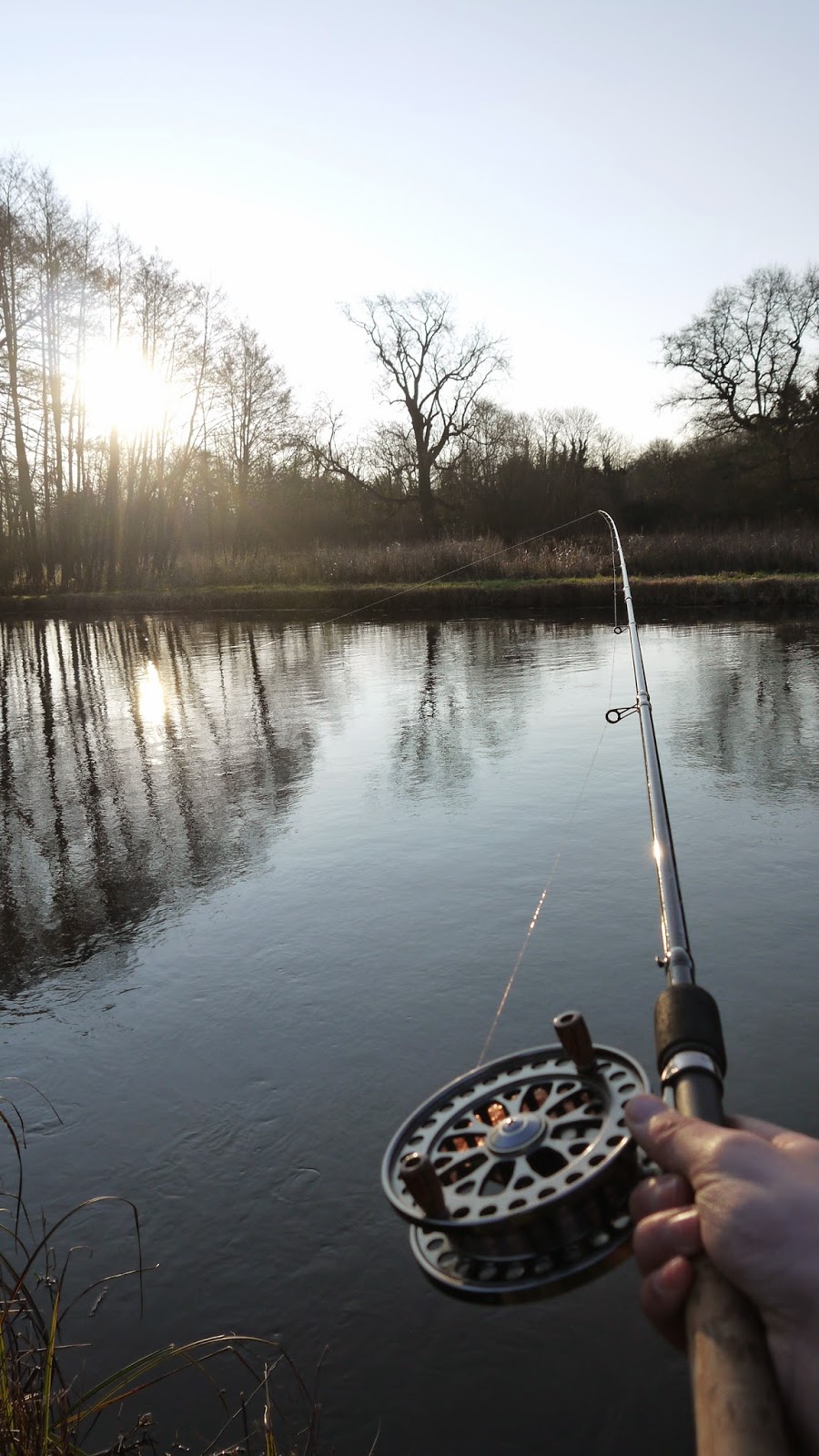 I reached the river around 8:30 and immediately found a lot of colour in the river which I did expect due to around 8 hours of heavy rain the night before but I still hoped that I'd catch or at least find spots where the Grayling would be patrolling, bearing in mind I have never fished on the Test and also on the Avon I had good advise on where to head and how to fish it, here it was all down to watercraft and knowing your quarry, so I'd set up a 3SSG chubber float at around 2.8 ft and fiddled with the shot distance to the hook until I got bites, this didn't take more than 5 trots before the held back float gave a positive dive towards the deck, a good strike was met with a fairly strong fish, a fierce gyrating motion was given off and when it got close to the bank a beautiful dorsal fin cut through the surface, a Grayling !!, and it was a good'un too.....a few seconds later a new PB Grayling was captured, on the scales she went 1lb 4oz, great stuff.

The next half an hour was littered with hard fighting Trout of different species, Brown, Rainbow?? And Sea, two which I did think I would catch at some point but Rainbow ( in the famous words of John Wilson " well I never did " ), I did not know they existed in the Test but i guess the river is perfect for them, the sea trout came out to roughly 3lb (x2), the brown trout came to a fantastic 4lb 13oz (x7) and the Rainbow trout which I had two of aswell to roughly 3lbs the largest of the two slipped back without permission but they give off a great fight.

The Grayling did come back on the feed after the Trout had their feast, a smaller Grayling of 10oz which before my first one today would have beaten my PB by an ounce came to the net which was followed quickly by another 3 Grayling two of which were around 12oz and the other at 1.6 which again set a new PB, it was turning out to be great session and yes they may not be 2or 3lbers but for me these were massive fish and it wasn't long before that PB was beaten again by a stunning looking fish of 1lb 7oz, things were looking good but as it got closer to 12pm the water was colouring up more than it was and I only managed a couple more Grayling ( 1.4 x2 & another at 1.6 ), so the stamp of fish were very good and I was very happy with how I fared in somewhat unfavorable conditions but it has to be said that the wind did at times help with the fishing by blowing from behind me to mend the line partially, not often you can say that.


By midday the Grayling disappeared and the fishing became very tough so I set about fishing for some of the chalk stream Pike but I only managed one very solid take which resulted in a lovely mid to upper double Pike but although I let the fish take the bait it wasn't long before the Roach was let go of, one flick of the tail and she disappeared into the depths, that proved to be the only action on the Pike front, since that water coloured up the fishing was practically done, a big shame as I'd loved a chance at a larger Grayling, but not to be greedy I left with a big smile and proud of my achievement, I will certainly come back for more, it was great fun and boy do those Trout fight and nothing can prepare you for the strength of the Grayling, and a tip for people who have never had a Grayling, when taking a picture of them they are almost impossible to photograph, be warned. 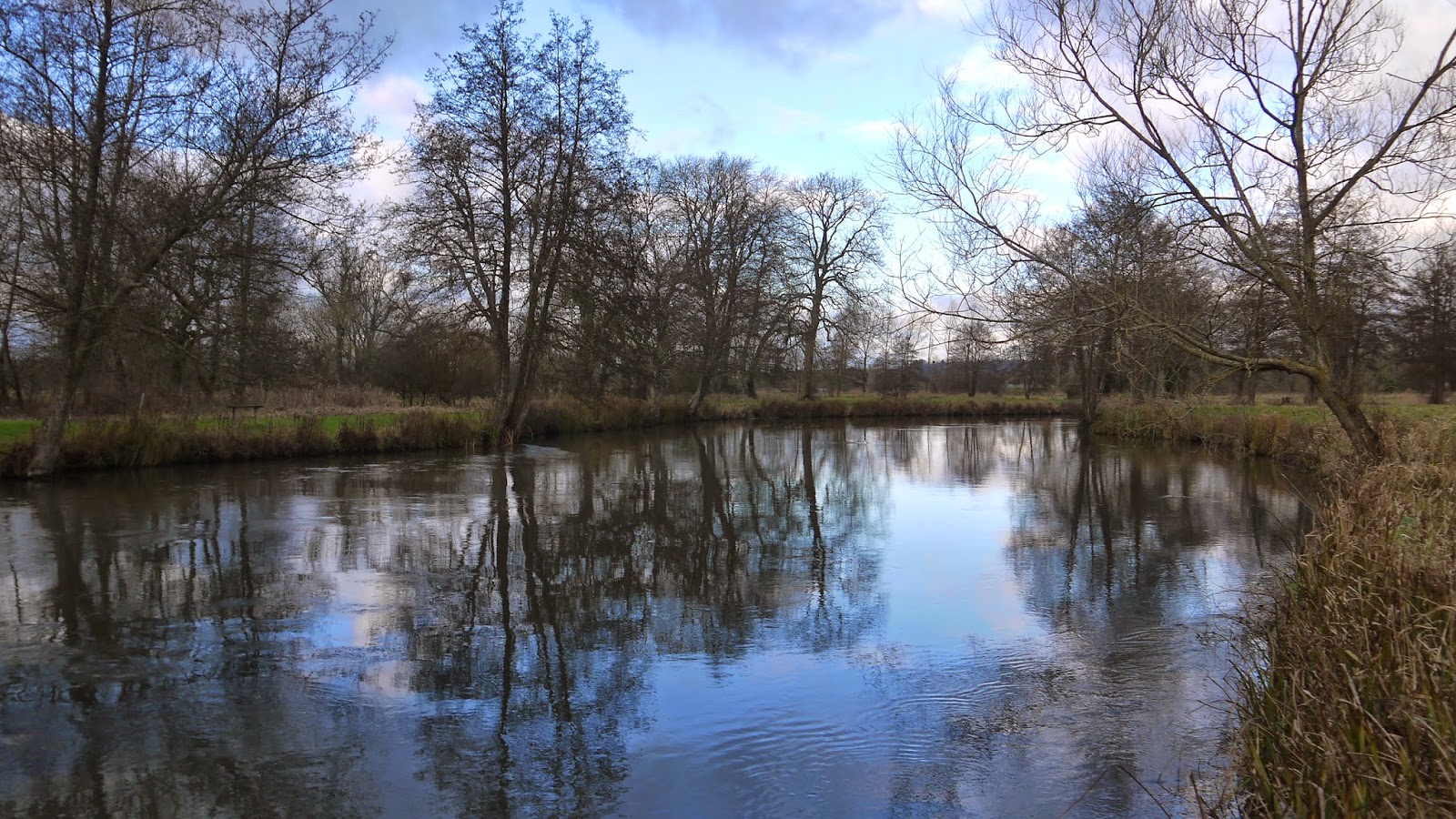 Can't wait to get back down in better conditions, only time will tell whether I can make.
- December 28, 2014