It's a scenario that I'm not often faced with but as I'm getting slightly older I feel the cold a lot more now than I used to, so much so that on Sunday I decided to venture out ( with Roach and Chub in mind ) and felt the freezing temperature I thought about calling it off and jump back into bed, five - ten years ago it wouldn't have even crossed my mind to bail out on a session. However there is still a little part of me that has no regard for the conditions and just wants to get out fishing.


Once I had overcome the frozen extremities I finally got myself into gear and decided to start on the float, the river itself was carrying plenty of colour and was certain that this would give me a good chance at some Chub but the Roach I thought would be a tough ask, even with the colour in the river and untold debris still coming down I still tried for an hour or so to find one.

Three swims later I had absolutely nothing to show for my efforts, nearly two hours spent scratching my head and trying to work out what was going wrong, bread I always find when roving in those conditions works very well and couldn't buy a bite. I continued to move around and was now a mile or so upstream from where I first started, the walk did warm me up slightly, coincidentally not as much as seeing your float slip away after your first trot in the next swim. It was the perfect start in the run and whatever I had hooked was a playing a very slow deep and hard fight, at first I thought I'd hooked a Barbel, a couple of minutes of hanging deep had me thinking but all the time I was slowly gaining on it. Shortly after getting the fish parallel with me it came up out of the murky brown water and a large Chub surfaced, I scrambled to get the net and slipped the net under what was an easy five, maybe even "six-pounder".


It was clearly a big fish and had gorged on water snail recently as it coughed up a few dozen onto the mat when I prepared the scales, it was thick, deep and a very good length too, it had all the hallmarks of a "six", the scales gave me a reading of 5lb 12oz and a new best for the river, one I have fished extensively and not managed anything over "5.10" which was back in 2011, I was understandably very happy and on my first trot too, I staked the keepnet in the margins and slipped her in. The next twenty minutes provided me with a very pleasing head of Chub, the next five fish weighed 4.13, 3.15, 3.7, 3.8 and 2.12 which was not bad at all, then the trot started to slow up so I put the rod aside and laced the run with bread crumb at 30 second intervals to stimulate the shoal into feeding again, I was certain more were present.


I had a quick chinwag on the phone with a friend before casting back out and for the next two hours the sport was consistent and another five Chub made there way into the safety of my awaiting net, I was in the zone, the size of the Chub seemed to increase again as fish of 4.10, 5.02, 4.07, 4.14 and 5.03. It was a red-letter-day and in the conditions it took some staying power to continue fishing and I'm glad I did! 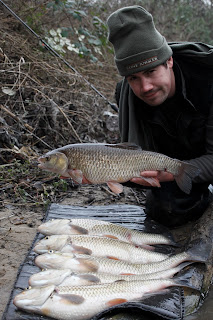 48lb 7oz of Chub was just what the doctor ordered. I decided to give another swim a go after my Chub tree died off but I spent another thirty minutes without a bite, it seems all the Chub in a mile and half section were held up in one swim, amazing how different the day could have been had I not fished that swim, lucky me eh!
- February 18, 2017