When I decided I was going to put more time on the bank in the evenings I did for a moment think it wouldn't be easy, but it has been harder than I imagined. Over a kilo of boilies and pellet has gone out in just over a fortnight in a handful of swims which look good for a fish, however no matter how good these swims have looked, most of them have produced nothing, not even a liner. Perseverance is a key factor for sections of river like this, low stock, very snaggy and no info to go on in regards to catches ( so I could try and devise a plan based on other anglers results/blanks ), without this it's all blind, although I must confess I am not a total stranger to this area. 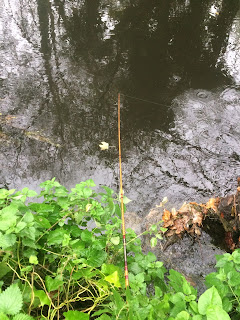 For nine trips up until tonight I had really struggled, a Barbel a few trips back was the tangible evidence I was in the right areas, five trips later and five blanks threw me a massive curveball, just when I thought I was getting somewhere, this evening I got down the river still with light in the sky which made my life a little easier. A few small handfuls of loose feed went out just whilst the gear got setup, little did I know though, over the last couple of weeks the rains have pushed all sorts into the swim I fished this evening, cast out for the first time and straight away felt the line was really tight, plenty of tugging to free my terminal tackle ended up in the line breaking.....great start !

Second cast......in the spot, perfect.......five minutes later a lump of loose weed pulled the lead out of position and into that unseen snag......setup number two gone......this was getting expensive and also time consuming as I had to tie yet another rig!. I thought to myself I need to get a bait out and keep it out there, owing to the leaves and weed the lead size was increased to a 1.5oz which was swung out, unfortunately for me I over-egged it and into a tree on the far bank.......I didn't think it could get worse, it could of I suppose had I not been able to get it back, composure was needed, I could easily have packed in there and then. 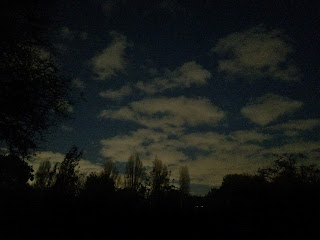 Finally after plenty of measuring up the cast I wanted hit the spot, a lovely solid thud as the lead hit gravel, just where the bait was going, could I keep the bait in the water long enough now was my worry, I sat and watched the end of my rod to see it sat rather still which made me feel confident the lead was holding in the spot, just to give me half a chance. Twenty minutes or so had elapsed when the silence was broken by two nearly fully grown Fox cubs which were playing just behind me, I sat on my chair with my back turned to the rod watching them when I heard the very sound I have missed, a screaming centrepin! Action at last.

Obvious from the beginning I was into a decent fish as the slow calculated fight ensued downstream, the first run happened so quickly I could only let the fish go, I nearly paid the price too as it found a large weedbed which it buried its head in, thankfully it didn't take too much to ease it out. A few minutes of charging around in the torchlight I could make out the outlines of a good fish but a foot or so down and thirty/forty feet away it's hard to gauge accurately. The net was shipped out as she finished off her surging runs with a dash for more cover, but with good control over her it didn't take much more to slip the net under my prize, I enjoyed that.

Not been easy and started to forget what a proper Barbel looked like, on the scales she rested on 10lb 7oz, on the Trent it's a good fish but not uncommon, here however a fish of this size is far from common! just the size I was after, I know the stocks are low and with this the average size tends to be bigger which is why the decision was made to target it more. 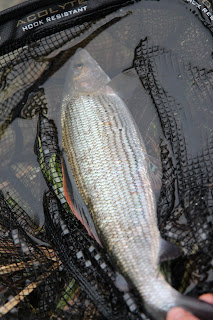