With the arrival of Storm Atiyah banging on the door the pressure dropped right out and midweek we were sat nicely around 1005mb -1010mb and fishing for Pike would have been easier than embarking on a trip in 990mb-995mb as with most species they tend to head for the bottom.

Without having the opportunity to go sooner my only chance was on Sunday, I take what I can these days and with christmas approaching rapidly my fishing time will be reigned in furthermore. With a couple of baits knocking about I hopped in the car before sunrise and set about targeting a Pike before the storm really took hold. 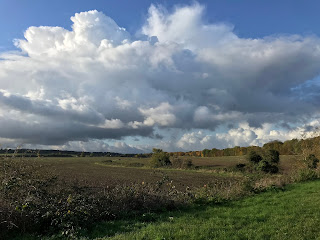 Running low on terminal tackle for predators I spent the other evening splashing the cash on various trace making stuff on the internet. Thankfully I had a few little bits left, just enough to make two traces. After a couple of hours driving my destination was finally in sight, the river unfortunately was shrouded in a fierce chop as the wind buffeted the open and fairly flat land. My only saving grace was a small treeline that had a few hedgerows that shielded a little of the wind, so naturally thats where I headed.

Setting up the previous evening meant I could get a bait straight out and it didn't take long for the excitement to begin. The float laid dormant for around five minutes before bobbing and then slipping under, a few seconds later I wound down and was met by a decent resistance, one that I love to feel. Powerful surging runs up river had me dreaming of a real monster, however, not before long those runs became weaker and weaker as the sting was taken out of the fight. Sure enough a couple of minutes later a mid double Esox lay in the net.

Not to be disappointed I did really think it was a lot bigger but I could not complain. Forty minutes later the float was back in action, this time however the float stopped in the back eddy I was fishing then started to head upstream but it didn't go under, a hunch that my small livebait had been picked up I slowly wound down to the float and struck, to my amazement a Pike tore off down stream and a huge vortex displaced so much water I thought this time it could be a much bigger fish.

Once again I was faced with some pretty strong runs, with everyone aimed at a far bank treeline, not the sort of place you want a big fish heading for, thankfully with the 20lb line and stout end tackle it gave me the leverage I required to ease her away from danger. I haven't been that happy on seeing a fish slide into the net (and only just) for quite sometime. The conditions coupled with the effort of getting there in the first place, so this for me given how busy work and family life has been it was a brilliant distraction!.


On the scales she weighed a little over eighteen pounds and in fine condition barring the dozen or so leeches that I picked off. I thoroughly enjoyed that battle and as I watched her disappear I wondered whether I'd get another chance. Sadly after another two hours of fishing I had to pack up as the winds were getting too strong and on numerous occasions nearly went into the river or narrowly dodged branches that were being torn from the trees all over the place, that was enough danger for me and a few years ago I came very close to dying in similar conditions so I drew on previous experiences and left.