Attentions Turn to Other Rivers.

With the tough proposition of catching a double figure Barbel off the Medway completed, other rivers can come back into the fold as my pre-season target of ten rivers looks to now be a very good bet, dare I say maybe even achieve eleven or twelve if the time, skill and luck allows. I remain quietly optimistic of such an achievement, I have done hours and hours of homework, had conversations with anglers who's patches I may one day wander, just to build an image of roughly what my challenge will encompass and where it will take me.

Once I had the pleasure of capturing and releasing that immense Barbel off the Medway I packed up immediately and made my way across Kent to the Kentish Stour, a river I've spent a bit of time on with very little success ( only Chub so far ). Given my bouyant mood I felt confident that a Barbel from here would be a possibility and that I could at a stretch achieve two rivers in one night!

To cut a fairly long story short I didn't manage to catch a Barbel but after sunrise I went on the offensive after a biteless 4 hours in a known stretch for the species. A quick wander with the gear left in the tall nettles I went about looking for a fish or two and not long after starting my search I did find one of about 8lb that slipped out of sight pretty quickly which didn't show itself again, then upstream I found a nice clear gravel bar, probably the only one for half a mile that I have access to and low and behold there was three big shapes hovering over the sand/gravel, one was of a big Sea Trout, the other two were good Barbel, both looked to be into double figures and certainly the size I wanted to see, unfortunately for me they pushed up above the gravel bed and into some very dense weed upstream and lost their positioning. 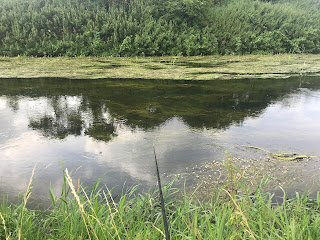 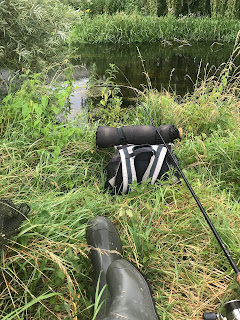 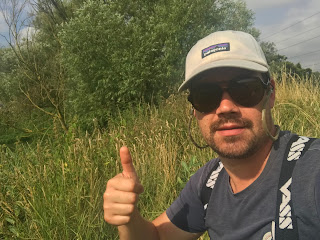 Seeing them on this trip was enough for me, a plan has since been formulated and my return will hopefully bare fruit of some description. By 10am the heat was unbearable in the waders and high grass so I called it a day, not to mention I'd been at work all day Friday, finished work, had dinner, swapped into the car and drove over to the Medway, then the K.Stour once I had caught that beauty off the Medway to make it 7 rivers down.