I spent a large chunk of my winter campaign for Barbel on the River Colne as various work engagements had me just a matter of minutes away and snap sessions were easy to come by before taking the M25 home. I spent a total of 64.5 hours over 13 visits with only one Barbel to show for my efforts, I really thought I would have had more joy but given the conditions maybe I should have been less expectant.

Knowing the Colne is far from easy I hoped that in time I would come across something impressive, but then the closed season came along and gave me the opportunity to reflect.

For me it was a prolonged closed season owing to a newly arrived addition to the Denison family which indirectly gave me even more time to hatch a plan, that plan would be when I got back on the tools that I'd grab short after work sessions, the sort of sessions I have come accustomed to owing to a busy life between work and family.

That extended time off gave me the opportunity to do some homework and do some pioneering on what turned out to be an almost impenetrable stretch of river, but historical information regarding this stretch would suggest big Barbel were resident, so I knew I had my work cut out. Also there were no guarantees that my efforts would result in catching a Barbel.

Last week was my first wander down the river and decided that a roving approach would be best so I could check as much of the river as possible and possibly earmark potential areas to concentrate on. Given the nature of the stretch access was practically impossible for the most part as brambles, 8ft tall nettles and giant hogweed blocked the way, trying not to give the game away I made very small paths through and doing my best not to break any of the vegetation and tip off any other potential anglers to my movements.

Last Wednesday was my first visit and with the football on at 8pm I knew I had to be gone by 6pm to give myself time to get home before kick-off.

A few areas were scanned with the polaroids and fished a few spots where I could get down to the bank or close enough to that if I made contact I could at least get close enough to land it! A couple of hours had passed by with nothing more than a Chub rap, a quick tug on the tip of Mark IV and brief screech on the pin, much too quick for me to hit!

Then as I reached a dense bank of fallen willows that were dominating the river a small gap in the foliage gave way to a small gravel patch in the main flow, no larger than a snooker table and on that gravel I could make out the shape of a fish immediately, that shape very quickly revealed itself as a big Barbel! just the Barbel I have been after! Certainly the double off the Colne that I crave and spent all winter targeting.

Not knowing whether it had made me I decided to retreat and get my hook baited, resting the area a few minutes before the bait was then lowered and the lead made a nice solid "donk" on the bottom, I knew straight away that it was fishing. The sense of anticipation was so strong, it had to happen, didn't it?

Over an hour had eased past as I watched the bottom through the unbroken nettles intently to see if that Barbel was back out on the dining table. Sadly, for me time wasn't on my side and stayed until 1815 when I knew I had to be gone as the M25 is so unpredictable.

I simply had to get back as soon as possible!

Fast forward to this Wednesday, my day was busy with plenty of work pencilled in and was super keen to plough through it to give myself plenty of time on the river. I got down around 3pm I think and made my way from the van, a mile away to the area I had seen that Barbel the week before. Much had changed in that time though, another tree had come down in the area in the high winds and the river was up about a foot with plenty of colour in it with debris coming through just to make presentation a bit more difficult.

I knew I had to just get fishing and hope for the best. The first twenty minutes didn't prove to be thrilling in any way but as the thoughts of moving to another bit started to cross my mind the rod tip started to show signs of life as a couple of "tap taps" showed me something was there and feeding, so my focus was firmly on the rod tip. A quick call to Brian to find out how he was doing on another river was brutally interrupted as the rod went into meltdown, I threw the phone to the ground and grabbed the rod, thrust it under the water as far as I could as the Barbel made off downstream on a tight clutch beyond the fallen willows where I knew I could run into trouble, experience certainly played its part for the following four or five minutes of that fight.

A good 5 minutes passed before I saw the fish I was connected to and the fight certainly matched that of a big powerful Barbel, however the shape that came to the surface just inches from the nets rim was of a smaller fish than my imagination had painted, but I could not be unhappy in any way, the effort to achieve this fish in the grand scheme of things was surely worth it.

Who would be unhappy with this Barbel?!!!! I definitely wasn't!. 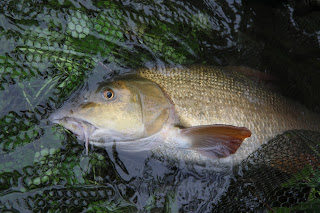 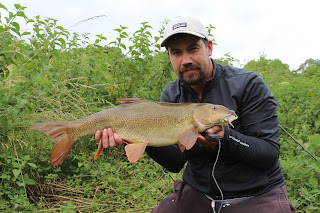 My river Colne best and firmly on my way to that milestone of 10lb+ and more importantly ticking another river off of my target of 40!

Suffice to say I did continue fishing and although no more Barbel came along a lovely Chub of 5lb 2oz made it to the net to add to what was already a bloody good result and only my 2nd visit to this particular stretch, the confidence was starting to bubble to the surface!

Until next time.....will I find that big Barbel I spotted last Wednesday? and will I catch it? I guess that'll have to wait until the next session.