Like anything in angling and indeed any other line of work or passion persistence is key to success or at least a vast majority, my trips on the R.Medway were mainly short evening sessions, in the hope that one day I would come across a creature of the deep. With the Medway spanning over 70 miles the scope to target is so vast, so location is key as usual. Bear in mind this being my ninth visit to the river since October last year and only recently breaking my duck, fishing has most certainly not been easy.

With conditions slowly cooling down south I opted to head out at dusk for a couple of hours and try my luck. I headed down with a little more confidence too owing to my recent catches on the Medway and Colne, so all I could do was try. A nice balmy evening on the bank was pleasant for a few hours fishing, just add Barbel! After setting up I aimed for a gravel channel just under my feet in the margins where I have suspected the target use as a feeding highway owing to the surrounding area, this stuck out like a sore thumb but as of yet over the previous visits I have yet to muster a bite ( the barbel I did catch from the Medway came from another area ).

After ten minutes I got a tentative knock that didn't result in much, or so I thought. A minute or so later my rod tip nodded towards the river and gently struck into what felt like a small fish, first thoughts were a Chub but it didn't take long for the culprit to surface and it was my target species, just a long long way off the target weight! Nevertheless wonderful to see. 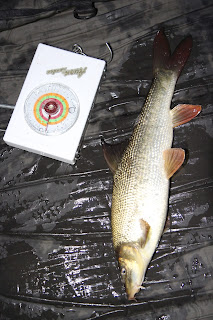 Bait was obviously in the right area so after slipping that mini-Barbel back the rig was straight back out and fishing. With no time constraints on this session I was prepared to spend as much time as required to give myself half a chance, just forty five minutes later had my time finally come?

I sat watching the stars beyond my rod tip night-light and the monotonous quivering of the flowing water passing the line briefly changed as something on the bottom was showing interest, before I got the opportunity to wonder what was happening down there I got the most savage wrench on the rod, along with an instantly screaming clutch, was this my chance? it certainly felt like it was my target species and whatever was on the other end possessed a fair weight, coupled with the power I began to get very nervous.

As I got nervous the heat of my breath was steaming up the torch so I was shrouded in mist which prevented me from seeing clearly towards the water, all I knew is that this fish was giving me hell in the pacy water and made its shape and weight count for every second of the battle, my rod was bent double for the entire time, quite something, but at no point did it seem to break stride, just a constant solid dogged fight. When she came to the surface after three or four minutes I knew I hadn't just achieved my target, I had obliterated it, if I was nervous to begin with I was shitting it now! A solid hook hold served me well though as she began to give in I turned the screw to put an end to the fight, it was one for thee epic battles scrap book thats for sure. The sheer size of it caught me by surprise! 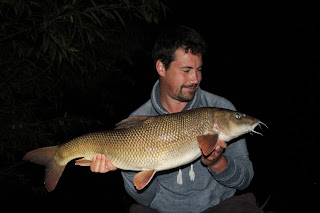 There was no doubt river number 7 had been chalked off and what a way to do it, fish of this size in the Medway are certainly not common and at 13lb 9oz makes me wonder what she'll do come Feb/Mar next year! After a couple of photos and the weighing I rested her up in the flow and in no time she began to kick strongly, a few minutes later I dipped the lip of the under the surface and my prize slowly eased out and back into the murky waters that are the River Medway.

Another river ticked off the list I packed up straight away and made the one hour journey down to the Kentish Stour where the next part of my journey begins, that will be for my next entry. Tight Lines all until then.