Having seen my target fish just last week and only on Wednesday slipping the net under a fighting fit Colne Barbel a new sense of purpose was found and my fishing mojo rediscovered once again after a tough 6- months of fishing. Since landing the 8.13 a return visit asap was a must.

So on Friday after work I headed straight back down the river and made a bee-line for the same area. The brisk mile walk was soon complete and with the warm sun on my back I got settled and gently lowered my Garlic Nimrod hookbait and small PVA bag on to the clean gravel bed, all I could do now was sit, wait and hope for some activity.

With fishing in mind after work I waited to have a bite to eat, so now that I was settled and bait out on the dining table it was time for me to grab something. I reached into my bag to grab some Pringles and as I began to turn to face the rod with food in hand the rod sprung into life and even on a tight clutch, a fish made off downstream at some serious speed! Thoughts immediately turned to Barbel, but Carp couldn't be ruled out as the Colne is known for them.

Same as Wednesday' fish I got the rod tip under the surface, almost grazing the gravel with the tip to prevent the line from running through the fallen trees all around me. The power was there for all to see, determined surging runs were followed by an almost dead weight, holding out in the flow. Given the nature of the swim I could not see how big the fish was until it was right in front of me, this however didn't happen for about 5 minutes as I continued to tussle with the fish at distance, the heart rate was through the roof, I was borderline petrified at losing it given the effort put in to get this far.

Just as the first fish, this one came up right under my feet on the clear patch where she revealed all, thats when the knees started to go, I knew this was the one I wanted!!

A couple of strong tails slaps and deep lunges told me she wasn't far off from being beat, but wasn't prepared to let her have much more of the chance to escape, with the net ready I flung it out, just at the right moment and dipped the rim where she then swam straight in! A fist pump in the sky and a couple of joyous obscenities were uttered, they had made me work for that one, but a bit of luck along the way on the balance of play it was deserved. 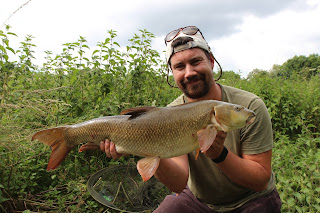 I can't convey just how happy I am with this capture and could not wait to grab a couple of snaps, weigh her then see her swim back strongly to may never be seen again ( can't imagine many will put that effort in required.)

On the scales she registered 11lb 7oz and checked off my sixth river on my 40RiversCampaign /  The Barbel Challenge.

That felt very good and after a long rest in the net she powered away to whence she came. With that my task here was done. It had been hard and worth it in the end.

Working on number 7 now and the aim is to have 10 rivers under my belt by November when the temps start to drop.