I must admit I was super excited about this trip and having enjoyed a great day last time around I hoped for something similar or even better. Following on from a baron day and night on the R.Severn and a rough 4hrs kip in the car I had a day's fishing once again on the beautiful R.Wylye. It was cold, crunchy under-foot and very bright which is excellent Grayling weather, myself and Mike who once again invited me down hoped the Grayling were feeding well and it didn't take long to clock on to a big fish that Mike had previously seen the week before. 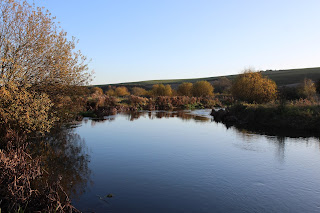 As it cruised across the lighter patches of gravel, hoovering up maggots my heart kept racing as ( what turned out to be a he ) everytime I thought my float would bomb under. After a good thirty minutes of working the pool I finally got that all important tug of the float and away it went. In six feet of water he powered around with the typical head shaking and rubbing on the bottom (trying to dislodge my hook), I could see the entire fight even at depth in the crystal clear water, all I wanted was to slip my net under it, thankfully for me I got the chance.

Thankfully for me, my day continued to get even better, gravel run after gravel run I managed to get bites as the red maggots were definitely the order of the day, with just 7hrs of fishing available myself and Mike looked to get as many fish on the bank before we lost light around 1615. 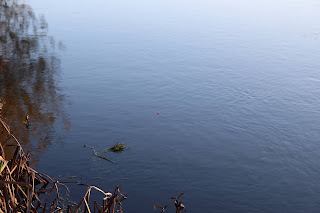 So without further ado, here is how my day went, oh and Mike had two crackers too!

...And if my day wasn't already superb, as sunset had came and went, with just a little bit of the float now visible I had two bites, I landed both....2lb 3oz and this one below at a new seasons best of 2lb 7ozs. 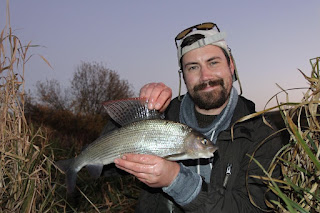