First off, a quick catch up from Monday, after a short early morning session I landed a 6lb 1oz Tench using lob worm under a crystal waggler fishing near to a bunch of lily pads the perfect place to find a Tench, my second 6lb + Tench in a week. 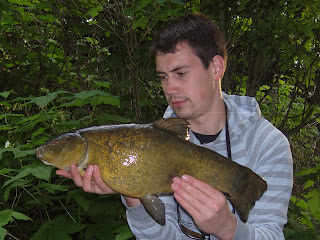 Yesterday I did also manage to get a few hours on the bank to try and catch a Carp or two and after a couple of hours of moving around a part of the lake I did manage to find a willing participant and when I hooked this Carp it did not give up, almost taking me through a bush it pulled some dirty tricks out the bag, also with the fight lasting nearly 10minutes the Carp on its first charge must have taken 60-70 yards of line and was literally unstoppable even with my clutch tightened up it stripped line with consummate ease but a good fight is always a good experience, so when the fish tired I guided it into a nice wet net for my first fish of the day, after a couple of pictures and weighing it at 19lb 10oz (it was a nice Common with a very nice woody colour), I released it and packed up to go off to do some fly fishing for the main part of the day. 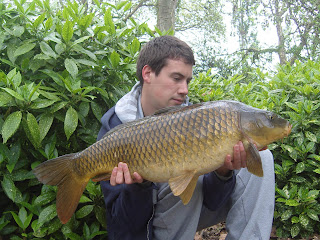 So after the early session I decided to enjoy the lovely 26c weather we had, donned my typical style of shorts and T-shirt but with the amount of stinging nettles present I didn't think flip-flips would have been a good idea to be honest, so after my deliberation on what to wear, I tackled up with 9ft brook fly rod and 5lb greys floating line and 4lb drennan specialist line for my terminal end. The session didn't go according to plan entirely after bumping a few Chub or Roach with a green shooter and missed the chance to hook a 5lb+ ghost koi-mirror Carp on my pheasant tail nymph, TWICE! how I missed either takes I still don't know now but the show must go on and then I had a micro Chub of about 3 inches long my first Chub on the fly albeit see through variety.

But I did hook a decent fish further up river in the form of a 3lbs 1oz Chub which did put a nice bend in the rod, now my second Chub on the fly ever. 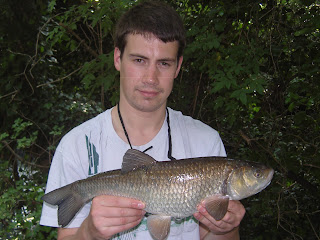 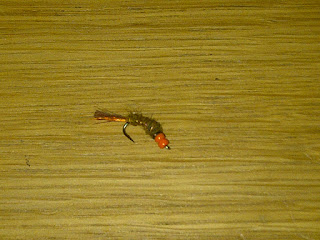 The fly the Chub took.

We did carry on up after that in search of a Trout and they have been so hard to come by recently I think unfortunately the Trout have been pinched out for a bit of supper because within a year the stocks seem to be dwindling some what, yesterday me and Stu a fellow angler who shares a very similar passion for Barbel walked the river and only came across 3 Trout and the biggest was no more than 2lb 1/2, last year I would have seen and/or caught them over 4lb, only last season I had a 5lb 2oz Trout, for the Trout populations sake I hope I'm wrong but why all of a sudden have they vanished and only small ones are now around, even further up I did manage to find a Trout willing to feed on the fly and missed it twice, two fish taking two bits of the cherry in one day, really? It wasn't to be my day to get a trout and with that we walked the 5 miles back down that we walked up and bumped into a nice 4lb + Barbel sat on the shallow gravels just watching us watching it, come the normal coarse fishing season I guarantee he or she won't be so blase, only 3 weeks left :) 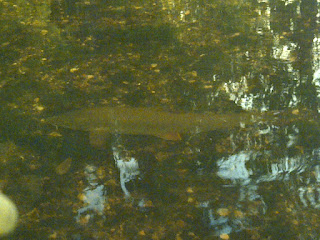 I'll be back, oh and there spawning.