I love this weather!

Over the last few days I've been soaking up the sun as much as possible with more work coming up my way over the next few months I'll be a busy man and any little pockets of spare time I can get hold of will be spent catching some fish, with the sun being as good as it has I'm not the only creature that enjoys the sun, the Carp have been going mental for the last 6 days and most have now finished spawning with only one dead Carp found which is always a shame, but could be much worse.

After the Carp finish spawning they always feed really well and this morning I thought I'd take advantage of that fact and have a go at expanding my collection of spring Carp.

By the end of the session I did end up with 2 Carp, one was a fine 17lb 8oz Fully scaled Mirror that fought like a demon and brought in about 5 pound of Canadian pond weed with it and just as I finished weighing it the sod decided to slide out of my mat and straight back to whence it came without a photo shoot, drat!!!.

The second Carp was a Common that was feeding on the surface for a little bit and I plonked a lovely piece of bread on it's head and it opened up it's cavernous gob and sucked in my offering and this fight was much better than the first one, obviously recharged after the spawning it gave a very good account of itself, charging around the swim and trying to round a bush and lose me init, after 2 attempts to land it, I finally got it in the net and this one wasn't going escape early. 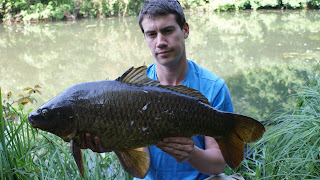 I did carry on after releasing that fish and went in search of a Tench and I did find a shoal of them in small bay basking in the sun and one of them did have a go at my bait but I just couldn't create any contact with the fish and gave up in the end, maybe another time.﻿
- May 29, 2012