After three months of waiting and amazing amount of impatience, the time had finally come to turn my recon into catching, so my plan was for the early part of the 16th was to target the Barbel and hopefully open my account pretty early on, but the fish unfortunately weren't feeding as avidly as I'd hoped and over the coming hours that came and went and still without a bite, I waited for sunrise and changed the method of approaching my whiskered friends.

After another couple of hours of searching for a Barbel the task seemed like it wasn't going to be a foregone conclusion that I thought it would be, but my persistence paid off at about 9am, when I trotted a bait through an over-hanging tree I had a powerful take and ended up with a small Barbel. 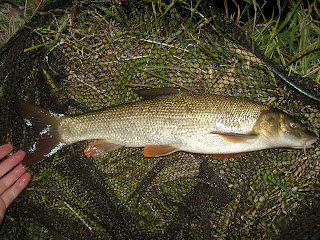 So I did have another cast into the swim and had another take straight away which turned out to be another Barbel but even smaller at just over a pound, so after putting that fish back I moved off down stream, asking myself (where are the big ones!!).

Next swim and the target was still the Barbel but as they do the Chub are almost always first to the bait and this Chub was a decent fish which when banked turned out to be 4lbs 5oz (a good first Chub for the start of the season), but when I had weighed it I noticed something coming out of its rear-end (not being filthy or anything) and curiosity got the better of me. 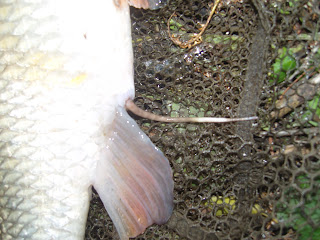 Initally what I saw 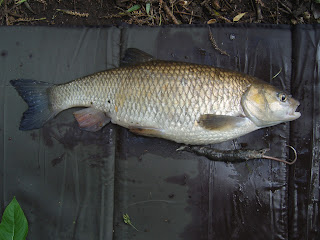 It was a MOUSE!!!! (badly decomposed and stank!)

I've never heard of Chub eating mice but this was proof that they really will eat anything. Madness indeed and after that the mood changed back to normal and finished up with another Chub around 2lb 8oz and then it was time to get some sleep, homeward bound.

But as I had packed up and walking downstream on my way home I peeped into a couple of swims that in the closed season I had seen spawning in and what did I see when I looked onto the gravels?,
you guessed it, Barbel spawning! thats why they are not feeding hard they've still got some business to do. Video of the Barbel below just after they were spawning and there were also 5 more above me out of the video blocked by the bush.