This afternoon I fancied going out to do some fishing owing to the fact I didn't get selected for my football match, so Roach fishing was on the agenda and my swim was to be the same spot that I fished towards the back end of august that I had been very successful in, with the sun out and 25c + it was a tad warm and that was good news as it was the weather that we had when I had the 2 brilliant hauls.

I arrived at the swim, set up, cast out and waited......... for around 3 hours before I got my first real bite and I had a fish on which turned out to be a Chub very annoyingly, as I didn't want the Roach spooked off by the Chub storming around the swim, after releasing that fish it took another hour and a half to get another take the day certainly was not going the way I expected it to, it just goes to highlight how right I was over the 2 last sessions in everything from tactics to bait and time of day.

The next bite that I got did turn out to be my target species that shot across the swim in typical big Roach fashion using the river to it's advantage, after a couple of short powerful runs I had it in the net and quickly weighed, 1lb 10oz, my Roach was landed.

That fish was shortly followed by an even bigger Roach of 1lb 14oz, nearly another 2lb Roach for the collection but it fell just short of that magical mark but after a hugely slow start I did manage 2 Roach both of which were of a fantastic standard anything over the 1lb mark is a fantastic sized Roach and I've been lucky enough to find a piece of redfin heaven even if occasionally they don't want to participate in my game and become famous.

Just 8 days until I get my long awaited visit to the Hampshire Avon, can not wait. 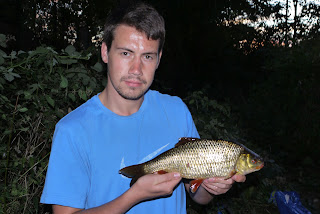