As the title suggests this afternoon I decided to kill a couple of spare hours and relax on the bank with the chance of bagging a Barbel whilst soaking up some sun, I travelled very light with my waistcoat packed with most of my odd and ends and the rest in my short roving gear in a shoulder bag.

On the way down I met up with Stu who also had some time to dispose of, so we set up in a deeper stretch of river and rolled a variety of baits through the swim with one of the first casts getting an enquiry in the form of ripping take with my rod bending right over and a Barbel on the other end charging around trying to ditch me on the far bank vegetation, but after a couple of minutes I had won the dual and landed my desired target, a lovely 7lb 7oz whisker. 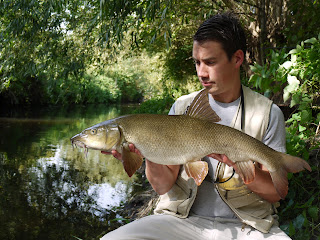 With a professional job of netting and taking the photographs by Stu it was my turn to do the ghilling, whilst creeping around the swim cleaning up litter left by idiots that call themselves anglers, I wasn't paying attention to Stu who was having a roll through and latched into a fish, I just happened to glance up and see Stu's rod hooped over, so with my brilliant skills of observation I asked, "Stu you in?", with the reply being a decent size Barbel roll on the surface as it headed back down to riverbed, a fight for a couple of minutes followed and it was my turn on netting duties. 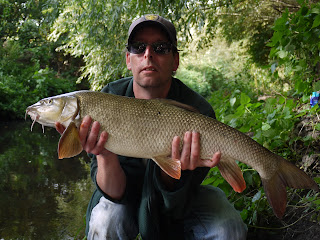 Stu with his prize at 8lb 1oz.
The day was all square and we both got what we came out for, but even if we didn't catch it's simply being out in the midst of nature and relaxing whilst socialising is why we do it, with many of my friends asking me why I do it, but if your not an angler they will just never understand the concept.
I wasn't finished though as I knew that more fish remained in the swim, so I changed my bait again and cast out which must have gone straight in front of a fish as my finger nearly got cut off by a vicious pull on the drop, definitely a Barbel on and today we really must have got it right as I haven't done that well for Barbel in such a short space of time for quite a while.
Barbel number 2 for me was on it's way in but it had other idea's as they usually do but again as regular as clockwork once they are overcome it's just about keeping their head up out the water and slipping the net under before they realise and bolt off again as normally that's when you lose them. 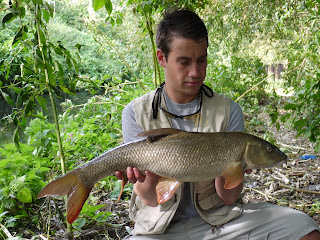 A stocky 7lb 2oz Barbel.
After reviving her it was time for a stroll and find somewhere else and leave the rest of the Barbel in the swim to get on with some feeding and put on weight, autumn is fast coming upon us and it is nearly prime time for some quality Barbel fishing.
﻿
﻿
- September 09, 2012