A great finish to a great season.


With the season drawing to a close on Thursday, I wanted one last trip out for the Barbel before I change tact and head off to the lakes in search of other quarry, today I used the same tactic as I usually do as it works so effectively even in this late part of the season, rolling meat is by far my favourite method when fishing rivers and over the last 9 months I feel I've come on leaps and bounds with the technique, but no where near perfection.

I got on the river quiet late by my standards, roughly 11am but I wasn't planning to be out for long due to training in the evening, 5 hours I felt was enough time to do some good fishing, with the passing snow showers and constant wind over the last few days today was a stark contrast with plenty of nice warm currant bun and the wind had died off considerably, much better for fishing.

Over an hour had passed and plenty of walking with no fish spotted and plenty of rolling had been done but nothing was on the feed but the one thing I love about rolling and roving light is that if you don't get a bite in 3-5 rolls then move on unless you see them, I had reached a nice looking swim with a deep gravel run that was ideal for rolling and it wasn't long before I saw a Barbel on the clear sunlit bottom roughly 5lb, seeing the Barbel doesn't always mean you are going to catch them and this small but wiley whisker proved that can be the case, 10 minutes of constant casting into the run and no take I thought I'd leave it and come back later. What happened next will stay in my mind for a long time to come.

I crept up to a swim just downstream and spotted a good sized Barbel probably around the 9lb mark laying up on the sandy gravel bed, needless to say I got into a position to cast and rolled the bait straight up to it when it turned right at the last moment and ignoring it, then I lost sight briefly of the bait and then my finger felt a slight pluck followed by an almighty wrench around then noticing a huge Barbel storm off with me in tow, on 6lb line and that silly match rod again I was connected with a big Barbel and started to feel understandably nervous about fighting such a large fish on let's face it very puny gear designed for Roach!, but the lighter the gear the more exhilarating the encounter and I certainly found it exhilarating, long powerful and meaningful runs, up and down river for a good 5 minutes, the longest 5 minutes I think I've ever experienced in fishing.

That five minutes had come and gone, my net submerged and waiting as a thick set, oak brown Barbel glided in, immediately I knew it was going to be the second biggest Barbel I've ever landed.

12lbs 6ozs of pure brilliance, a very happy me and still smiling now. A massive Barbel and a massive result, the colour of the Barbel is one of the best I've seen, immaculate bronze flanks. 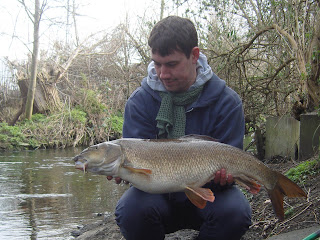 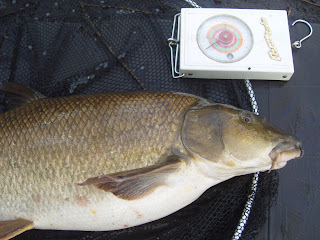 Head nearly the same size as a set of Avon's.
I could easily have packed up then but my last Barbel session I couldn't finish after about hour and a half, so after I had weighed, photographed and revived the specimen beast I sat back and took stock of the capture and spoke to James snr ( dad ) to let him know what I'd caught, 20 minutes later I decided to have another cast in the same swim but further down and on my first roll in about 6 feet of water along the far bank I had another take within seconds, I was connected to another good sized Barbel but it hung low in the water and didn't see it until it was ready for the net, the session was getting better, if it could, on the scales she went 8lbs 15ozs another quality fish. 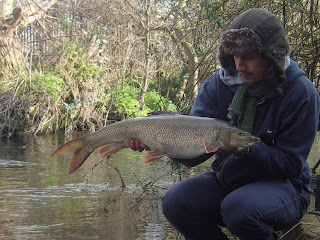 ﻿
Another pristine river prince.
The day didn't finish at that either, I managed another two Barbel both in the 5lb bracket and one of those at 5lb 4oz was the one I saw earlier in the day that didn't want to feed, but the persistence paid off with that one which took my total to 4 Barbel for the day at over 30lb in weight.
A day I won't forget in a hurry and it's these days on the bank is what makes fishing so special for me, a 12lb Barbel is a big fish one that I will remember for a long time to come.
﻿
- March 14, 2013