My return to the Great Ouse


Last Saturday I decided to head back to the Ouse in search of Chub, when I got there accompanied by my brother Chris I noticed that the river had come down drastically and lost all of it's colour since I was there two weeks ago and I must admit, I really fancied catching a few fish, the conditions were perfect if not a little too perfect, for the Chub I think a little bit more colour in the water may have been an advantage but you can only fish what is in front of you at the time.

So we both set about roving around me after anything on the float and Chris was hunting down the Pike with a collection on spinners and sprat on the float, it wasn't long until I spotted a couple of Pike to about 6lb but Chris didn't manage to persuade them to feed and my chance of a landing my first Ouse fish came when I trotted a piece of bread flake in a back eddy which was taken by a nice Roach of about 6ozs, task done - a fish off of the Ouse on my second trip and not necessarily a beast but I was happy with a fish.

As the day went on I persevered with the trotting and feeder fishing bread, fishing every snaggy swim and run that looked like it would produce a fish, with a good walk put in up the whiting's beat in search of Chub I bumped into Trefor West and an angling partner of his, Ray, who gave me some very interesting information on the river and the Whiting's beat in particular, Trefor had a 4lb Chub earlier in the day but apart from that one Chub everyone on the beat had blanked and the time was passing really quickly for me and it was becoming more and more difficult to see where my next bite would come from, meanwhile Chris was still chasing Pike with no joy and another two or so hours passed with no more bites we both decided to pack up and head back to London, but vowing to come back next season to try our hand at catching "the impossible", or so it seems for me, a 5lb+ Chub not to mention that the Chub here go up to 8lb, with also a good stock or sixes and sevens to be had. But until next time. 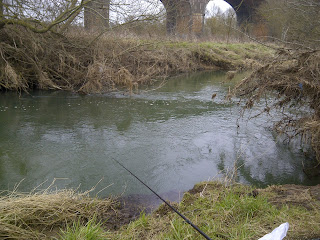 A very Chubby looking swim, they were there! I know it. 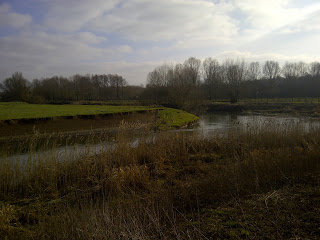 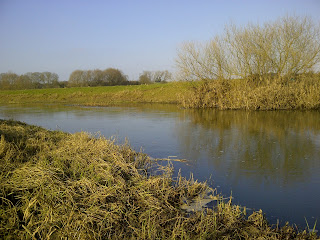 A glorious day in the end, even managed to take a fleece off. 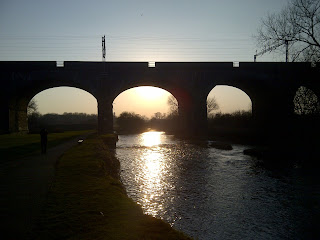 Sunset through the arches of the Wolverton viaduct, but no Chub and one Roach for my troubles.