Well not quite but the day as you could probably gather was myself in search of some more red fins, my quest for a river 3lb Roach is my ultimate angling goal, not a target for the faint hearted as it is a target that could quite possibly never be achieved but I'll try everything possible to make it happen all I need is for that one fish, that one chance then it is up to me. But let's leave the world of fiction behind and enter the present world that doesn't involve 3lb Roach although I wish it did, maybe a 2lb Roach today will be great and that is achievable although again not guaranteed. 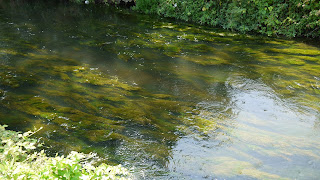 One of the runs I fished for the Roach, just downstream it widens and deepens.

It was a roasting hot day that without shade would have been quite unconformable, so had to find some shade, my tactic for the afternoon was to use a Drennan stick float 3BB and 3lb line with my trusty 10ft trotting match rod, the ideal Roach fishing tackle, travel light and fish light.

The first hour brought about a few Chub to 3lb and a few small species, Gudgeon, Minnow and a solitary Dace, but I hadn't had the one species that I wanted so I came off the maggots and went on to the bread and within five minutes I got my wish when the float slid away and I was met with a stronger than normal fight, a nice Roach was on and darting through the runs of weed, navigating the floating weed was the difficult part it had already bumped off three fish, but after a couple of minutes a pound + Roach was sat in my net, 1lb 4oz on the Avon's, it has been a good start to the season, all my Roach have been over a pound since the season started. 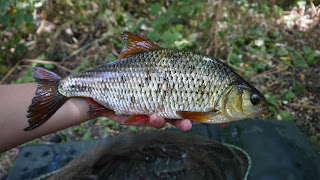 A lovely dumpy Roach, it took just over an hour to get my first one, then two casts later and I was to get a fish I did not expect, I know they are in here but very rare and over a pound even rarer, that fish was the Rudd, the fight just as good as the Roach before maybe even a little stronger, the fish took the same path as the Roach to the landing net, which happily slipped it over, another English species caught, the list is starting to take shape now. 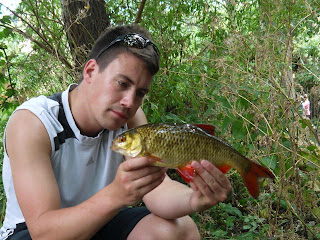 My biggest and only Rudd so far this season at 1lb 7ozs, absolutely pukka! 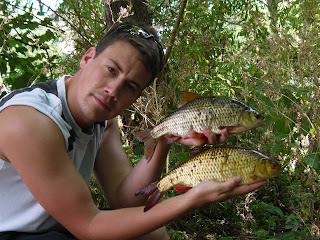 The previous 1.4 Roach ( top ) and the Rudd at 1.7  ( bottom ).
Brilliant to catch a Rudd, on rivers they seem to be so rare I only catch a couple a season, that's including a fair amount of time fishing the tactics that do pick them up, about 30 mins after that capture I did finally get another bite, something that didn't seem very forthcoming during the whole session, it's usually bite a chuck or two but today the heat on Sunday kept a lot of fish from wanting to feed so I was picking off the odd one, hardly any Chub much to my delight as they can ruin swims single handily, that bite though was off of another Roach which seemed to bit a little larger than the fish prior and after a couple of minutes of it ducking and diving through the vast beds of weed it too ended up on the bank. 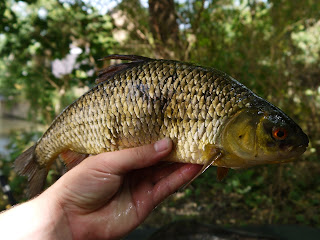 1lb 9oz Redfin largest of the day.
Another good Roach, this stamp of Roach is fantastic, such a pleasure to find a shoal of fish like this, I had searched for years with my dad just to find a holding spot for Roach and now as the years go by we find more and more stretches that hold good fish, the river Mole is going to be my next target as there are some good places for big Roach there too, with a 3.13 Roach coming off of there last season, which was in the angling press but the youngster who put it in there said he caught off of a different river, to protect the fishery he fishes which is fair enough and I know where he caught it but that will remain mine and his secret.
Will I ever catch a 3lb Roach who knows what the future holds.
- July 16, 2013