When the sun is out this warm and for the period that it has, it has to be said there isn't many more species better than the Carp to target, as they all start to cruise the surface in search of daphnia and other surface and water born creatures, stalking for Carp is great fun and finding them whilst they are feeding between times that they aren't basking in the sun, location of the fish is key, bait selection is often the good old Pedigree chum mixers soaked for 24 hours to soften them up, to fish for them I prefer to free line but that does have it's limitation especially if they are at range and on some of the lakes I fish, margin fishing for Carp isn't possible.

But I sometimes use a controller float to get my range, the gear of choice I vary between fixed spool reel when I'm fishing at distance and a centre pin when at ranges of 0 - 35yrds as the fight on the pin is brilliant for Carp.

The tactic of a float and the centre pin was deployed and I was joined for an evening session of stalking by my dad James Snr, who isn't shy on catching Carp through stalking and I have learnt much about Carping from him since the ripe age of 6 when my first ever Carp was a 16lb 10ozs fully scaled Mirror Carp and had my first 20lb + Carp at the age of 7, I owe a lot to him for many aspects of my angling style of today but it was the tutor of old being taught how to do it with 3 Common Carp being landed and a 4th missed when my float buried itself but unfortunately I didn't connect to it.

My first Carp of the evening was a chunky Common of 14lb 15oz which put up a good fight on the light 6lb line and pin, after a battle of around 7 minutes she lay rested up in the margins, after weighing the fish I slipped it back without any pictures, for I was focused to try and get a second, but a second didn't come for a long time.    2 hours to be precise and plenty of stalking until I did get a shot at another fish when my bait must have sunk below the surface because I didn't realise I had a take until my float slid away confidently and hooked into a fish and it didn't seem large at all, it came up to the surface slowly and didn't fight strongly at all for about 3 mins, when it approached the net it came to within 4 foot of the awaiting net when the fight changed drastically, all of a sudden it felt like scrapping and charged off on a 80-100yrd stretch, all I could do was place my thumb on the pin and apply what pressure I could, a supposed little Carp turned out to be a decent one but how big I could not tell.

10 minutes had now elapsed and the Carp was still hammering it's way across the bay in front of me stripping line and was by this time collecting a lot of weed on the line which was making the fish heavier all the time but the pressure on the line and the hook hold wasn't good but the weed did also start to cover up the fishes head so the fight became more of a plod, a couple more minutes passed when I had finally got it back to the net and she slid in first time, bearing in mind it was pitch black by this time I didn't see the fish until I tried to lift it out the water, when I realised I had banked a big double maybe even a 20. 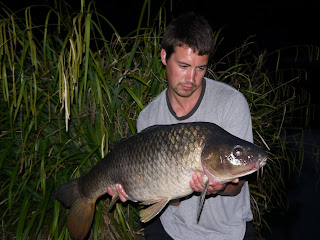 As soon as I got her on the mat, we both said a twenty, it was plainly obvious, a real thick fish with a width of around a foot, with an almighty paddle at the business end, 20lb 7oz my best Carp of the season so far, but I do fancy some bigger than this fish as I know in London the are waters available to me that hold Carp over 45lb +, what a tale that would be eh?!

The night didn't finish there either with a further capture of a 16lb 8oz Common right at the end of the session but the night belonged to the twenty for it's fight of two halves, what a contrast, I hope for some more of that but I would love a couple of twenty pound Mirrors, maybe even a thirty.