This morning I gave the Pike fishing a short break and went trotting for a Barbel or two, the river was low and clear as it hasn't rained for over a week and for me those conditions are perfect as I like to fish for Barbel stalking style, travel very light with the most basic of gear and your not trotting properly unless you are using a centre-pin, it makes life so easy and the direct fight to the fish is second-to-none, the control is also unbeatable.

I only had a couple of hours on the river and spotting Barbel was proving to be difficult and only saw half a dozen whilst I walked maybe 2 miles of river and on my second cast of the day I connected with a good Barbel, I trotted down about 20 yards to where I scouted out a couple of beards sat on the bottom at the end of a gravel run in around 3ft of water, on the first cast I was fishing a little too much over depth and the shot caught on the bottom and the float vanished but I knew it wasn't a take, so I shortened the depth to around 4inches over-depth and the next cast was soon met by a Barbel as the float confidently buried itself, the fight that ensued was brilliant, the one that didn't want to give up. 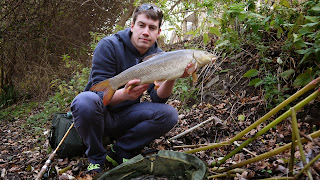 Another good average Barbel of 7lb 1oz, only if every species of fish fought this hard and on a cane rod the power the Barbel generate is relentless, much better than carbon rods but everybody has their own opinion, the only down side is that you are not in control as much as you may like to be, but apart from that, there's nout better. But for rest of the morning I didn't add to my earlier Barbel but it was a nice trip out. Wednesday I may head off out and resume my quest for Pike, nearly half way to my target of 200lbs.
- November 30, 2013