Since the weekend I've been sat at work clock watching and with good reason too, the last few days Brian author of Pike Blog and myself were planning a trip to Walthamstow reservoir, but as we checked the conditions for Wednesday we concluded the weather was ideal for both a trip to Tottenham or a nice excursion to the lush green of Dorset, it was obviously the latter that was decided on and as soon as I threw the Royalty into the mix there was no other winner, Brian's first trip to this magical fishery and my opportunity to emulate my last trip up here nearly 2 months ago. 2 months already.......... How time fly's.

For once I managed to catch my train, Brian already at the station we was all good to go, two hours later we were at Christchurch and with an hour of us starting the session looked bright as my float fished Sprat decided to come to life and wander off, ten seconds after the initial pickup I lent into a Pike, not one that the fishery is famed for but an Esox all the same and it was nice to get one on the board so early on, at 6lbs the fight was fairly poor but it certainly made up for it out of the water. 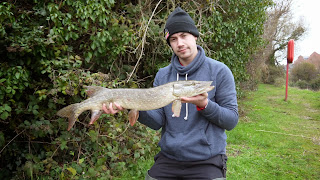 After that Pike we decided to stick around a little while longer based on the assumption that if one was on the prowl then more would be, but it turns out after a further 30 minutes nothing else was, so on the move we went, fishing parts of the Trammels and the little weir and its link to the bottom of watermeet, persevering with that stretch of water after a couple of hours we were with
out any indication of life, it was fishing quite hard, maybe Brian's first trip down here wasn't going to be straight forward as we hoped. 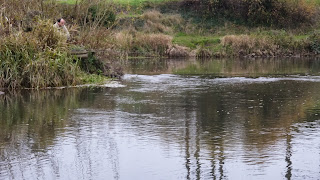 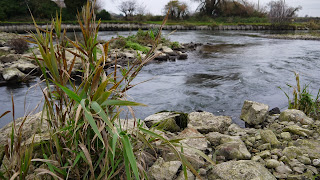 Dusk came and went too quickly for our liking, with the light failing at 355 it was too short to try and influence anything but as night settled in we headed back to The Piles and put out a couple of baits, on the bottom and under float, to try and find out where they were feeding, but as 6 approached we only got one more knock and that was a smash and grab off of a Pike on Brians ledgered Sprat but unfortunately couldn't connect to for reasons I wont divulge, all in all it was a cracking day out as it always is but its a shame that Brian didn't catch one of the resident Esox, but that's fishing, we will both certainly pay another visit come mid-December. They will only be getting bigger.......maybe a twenty pounder, I wish. But until next time tight lines.
- November 29, 2013