Owing to a very hectic lead up to Christmas I haven't managed to update my blog, but I have managed a couple of short sessions.

My brother Chris and I had an evening session down to my local river on a lower beat for some of the good Chub that inhabit it and not to mention the Barbel.

The river was up and very coloured with plenty of debris coming down including a couple of 6ft plus pieces of tree that had been torn away from the riverside by the extra water and also smelt quiet awful too but Chris and myself didn't give up and spent about 4 hours out on the river trying different swims but we neither managed a clear cut chance to bank a fish with a couple of enquires that I imagined were Chub, Barbel or Roach passing across the bait, the only thing that worked out right was that the rain held off the whole time and as we entered our parents house with the gear the heavens opened up.

For a change of scenery again we decided to go to one of my local lakes in search of Perch and maybe a Pike that are very elusive but over the last few years I have passed the lake and seen Pike basking in the sun close to structures on the island, so again Chris accompanied me for a short spinning trip in the hope of catching a stripey or two.

My set-up was a 6ft Shimano spinner rod with 6lb line with a 12inch 25lb wire trace in case the Pike were feeding and also a selection of Mepps spinners of different patterns and colours and as the lake isn't particularly deep we both decided to use spinners of weights between 3g and 6g. 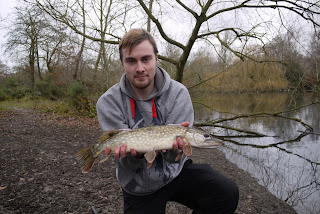 Chris above with the first fish of the day, the elusive Pike at around 3lb and a fat little git that has been eating all the fish, with a couple of scars on it as well which is a good indication that larger Pike are still about and unfortunately that was the only joy we had between us and again I blanked but just nice to get out even for just a short amount of time and relax, but it was quiet a surprise though that I did not manage to catch a Perch as we fished some extremely Perchy looking swims. 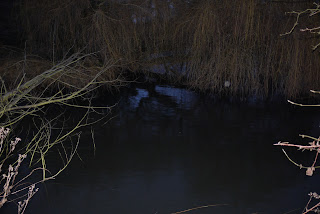 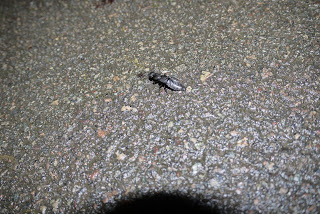 Devil's Coachhorse escaping for safety.
Thames Pike fishing soon with a couple of trips planned so hopefully a beast will come my way.
And also Merry Christmas to everyone and a Happy New Year.
﻿
- December 25, 2012