Today I managed to get out and do some fishing nice and early, last night was quite mild and I hoped the Chub and Barbel were on the feed so I packed very light and only packed the basics but I did make an adjustment to my gear, which was the changing of my line as I usually use Diawa sensor but recently I have had a couple of line breaks and I have almost lost faith in it so I spooled up a couple of my Shimano Exage 4000 reels with 7.3lb line from Rovex XTS mono line to see if I could connect with something decent to give the line a test to see if this brand of line is any good and I employed my usual tactic of rolling.

A couple of miles walking and popping in and out of swims I struggled to find a fish of either species but I did after about 2 hours of fishing, I hooked a Chub that put up a fight but very briefly that weighed 3lbs 2ozs, which is a good fish to catch that did save a blank on a day that it seemed was becoming more and more inevitable,  I decided to go back on myself and try again to see if I had missed one that was lingering about.

So after along walk back and another hour or so had passed I was just thinking about packing up when my rod wrenched around in my hand, instinctively striking into a Barbel that wanted to fight and it did, very well it has to be said plus the line was doing okay and also I felt more confident that I would land this one, roughly 4 minutes of it scrapping around I reached for my net and she came in first time, after weighing, photographing she was released fit and it was time to head home. 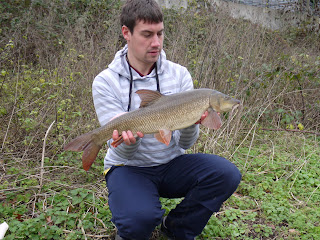 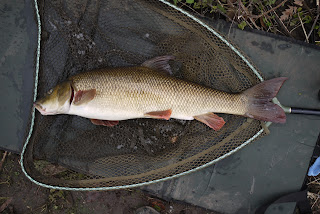