It's been a short while ago since I last posted, this being down to various factors like, work work work....I'm not one to complain and not doing it now either, but when this amount of work is about the angling takes a back seat and squeeze out sessions as and when it's possible.

Recently the Bream have completed their spawning and I think are just starting to go back on the feed but the hot weather seems to be curtailing that slightly and the couple of short sessions I've done have been very tough but I had some success whilst targeting big Bream on a local river, first of all I'll start with the lake fishing and plenty of tweeking has been done with my gear and using a few different baits to try and find the winning formula, in the reservior and lake I decided to use robin red 12mm pellets fished in conjunction with a small pva bag with 3&6mm pellets to add a little attraction to my offering, with time not really on my side I hoped I dropped in on some fish and get a response fairly quickly but after a couple of hours on both sessions my rods remained motionless, beautiful evenings by the bank but no smelly net for me to transport home, most would see that as a bonus but a dry net often means a unsuccessful trip. 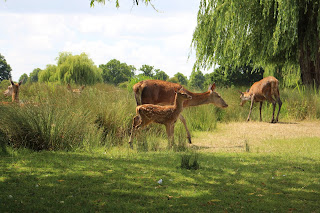 The river fishing however turned out to be skittle more exciting as I targeted large Bream in the crystal clear water amongst willow clad banks, the tactic was again very simple and introduced a couple of handfuls of corn in slack areas and repeated this in three or four swims before headed back to the first swim. After arriving at the first swim I spotted 3 good Bream sifting through the gravel in search of the corn, most had gone by the time I arrived and a quick baiting of the hook with three grains I lowered it into position upstream and allowed the current to waft it down naturally into the baited area, bearing in mind these fish had no reservations in eating the free stuff my hook bait went untouched for nearly twenty minutes, I felt that the line or hook could be seen and this was spooking them, after adding a 3lb hook link and a size 16 hook the bait went back out but I only sent down one grain and a couple of freebies with it, a minute later a lovely dark slab inched up towards the hook bait that I could see clearly on the bottom, the corn disappeared and didn't await the line to tighten, the game was up for this koi bugger.

This river snotty didn't fight brilliantly but wasn't lethargic like most of their brethren, target was to catch one and I'd done that but not a double, another time for sure, but it didn't finish there though as I landed another of 6lb 4oz in typical post-spawning condition.

The session didn't end there either as I know some very large Carp call this watery oasis home too, cut a story short, I found one of these monsters  ( estimated between my father and I at roughly 30lb ), the chance came and she sucked my ledgered bread in a treat and I struck and totally missed it, how on earth I didn't make contact I'll never know but this isn't the first time and bet my last nugget it won't be the last either, I will definitely be back for a crack at one of them.

A couple of pictures from a brief session trotting last week as well, plenty of Gudgeon to 2oz 1dr and a decent net of Roach with the best below.