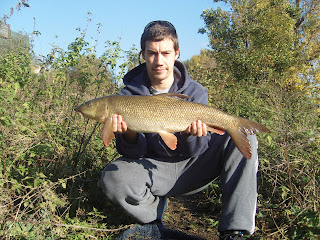 Been a week since i last had a go at my fav' swim hoped no-one has been there for a while (wishful thinking), got there to find a empty fresh tin of luncheon meat laying on the bank, to which was a good indication that it hasnt been unattended to for long but even still with the nagging feeling in my head that i wouldnt get anything, had a take almost immediately but only made contact and that was it, so back down again for another go and 30minutes later had another take identical to the 1st and this time made no mistake with this pristine 6lbs 14ozs Barbel, so a good start to what turned out to be a red letter day! 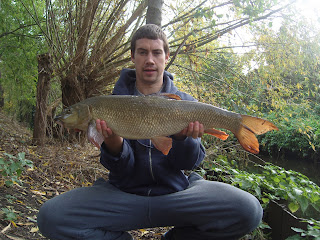 2 hours of searching brought me to a spot i haven't fished much due to the amount of other anglers in and out of there but couldnt resist the temptation and saw a couple of Chub knocking about thought that if there around then the Barbel may be home, the 1st thing i knew of a presence was a very strange knock on the rod then the line started to slacken up and thought its worth a hit and then after a typical dirty fight trying to cut me off on anything it could find finally got it over the lip of the net and thought it may be bigger than the 1 from downstream earlier on in the day and right i was when it went 7lbs 1ozs on the trusty old reuben heaton's but the day was going to get even better when after another hour wait in the same swin saw and old friend that seems to have lost a considerable amount of weight in just 2 years. 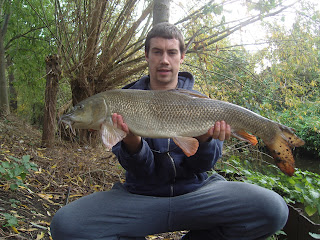 A large frame but only weighing 9lbs 0oz

Unfortunately my dad had this fish in august 2009 and it weighed 11lbs 6ozs which is still his current personal best. Sod he's still beating me!. Though it did tip the scales to 9lbs exactly so still a very nice fish indeed. But after that the bites had dryed up and was time to head home, one of my best days on the river believe me these dont happen everyday 22lbs and 15oz of Barbel in one day is a feat on such a small river.
Email Post
Labels: barbel